The Covid 19 pandemic is having devastating economic effects on the global economy. Not only is the pandemic causing massive unemployment, but an economic slowdown occurring faster and worse than the Great Recession of 2008-2009 and probably more destructive than the Great Depression of the 1930’s. Main Street U.S.A. is experiencing not only the loss of millions of jobs, but seeing many businesses closing their doors permanently due to economic collapse. Businesses that are still open have no idea if they will see customers come in the front door for the remainder of this and into the coming year. Business owners are urging their government leaders, in loud, distinctive, and scared voices, to remove restrictions and allow them to sell their goods and services so they can stay afloat.

Wall Street saw serious declines in the Dow Jones Industrial Average (DJIA), as well as in other major indices, as stocks took a serious tumble and investors lost trillions of dollars in financial capital in a very short time. This type of decline was last seen during the Great Recession of 2008-2009 and the Stock Market Crash of 1929. But the amazing thing is that, despite the recent downslide, Wall Street has rebounded sooner and faster than Main Street. While Wall Street has not yet recovered all of its losses from the start of the Covid 19 pandemic, it has been coming back to the point where many financial analysts feel that the DJIA could exceed its all-time high of 29,551.42 achieved on February 12th, 2020. Now the concern is why this has occurred and what it means to the American economy.

Not since the Great Depression of the 1930’s has Main Street U.S.A. seen such a devastating period as the current one. When discussing Main Street this primarily means small businesses ranging from stores that are Mom and Pop operations with as few as two workers to larger enterprises such as restaurants employing fifty or even more people. But regardless of their size, these businesses have suffered immensely in such a short time period.

According to Main Street America (MSA), a network consisting of greater than 1,600 commercial districts throughout the United States and comprising about 300,000 small businesses, the news is not good. MSA conducted an online survey in April 2020 to better understand Covid 19’s impact on small businesses in which a vast majority had fewer than twenty employees. Among the findings of the survey were:

The frightening part of the survey is that many small businesses are anticipating hard financial times due the Covid 19 pandemic unless there is a sudden turnaround or substantial aid from state and federal government programs. The ripple effect will be that small businesses will close down in masse resulting in huge amounts of unemployment, empty store fronts, and either a very severe economic recession or a depression.

A study conducted by the Federal Reserve Bank of Richmond in April 2020 collected data on the effects of Covid 19 on small businesses. The survey collected data from restaurants, food and beverage businesses, retail stores, and service firms. Among the findings of the study were that:

In order to help Main Street in its financial and economic dive, the Federal Reserve Bank has devised the Main Street Lending Program in which it will buy up to $600 billion worth of loans made to small and mid-sized firms. This program is designed to help lending to small and medium-sized businesses that were in good financial shape before the start of the pandemic. Among the features of the program are:

Hopefully, these programs will help Main Street at a time when it is desperately needed by both business owners and their employees. 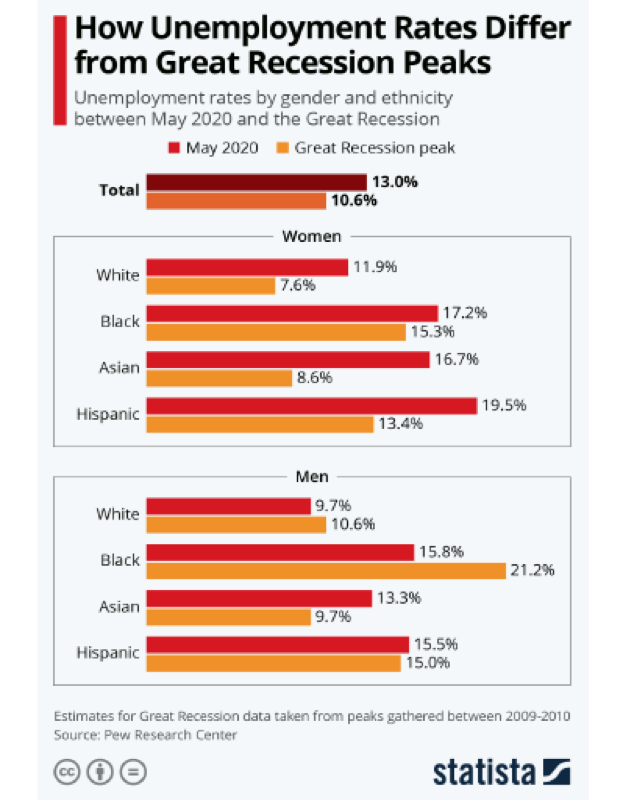 The key rules to keep in mind about Wall Street can be summed up as follows:

But the key ideas to keep in mind is that: Wall Street is not Main Street and Wall Street is not the macroeconomy. Both Main Street and Wall Street have been hit, and hit hard, by the Covid 19 pandemic. But each have reacted differently: Main Street sinking and Wall Street rebounding. This only reflects why they are two different worlds. Main Street reflects small businesses that are barely getting by with just enough financial capital to survive. However, Wall Street is based on the trillions of dollars in capital from rich investors, hedge funds, insurance companies, mutual funds, commercial banks, and investment firms that have a wide variety of financial strategies to see them through any down period or unexpected event. Many small businesses do not have the cash cushion to deal with unexpected events and usually must deal with each day as it comes.

The two are at opposite ends of the financial spectrum. “Wall Street has very little to do with Main Street,” says Joachim Klement, a market analyst at Liberum Capital in London. “And less and less so.” At one time in the United States, Main Street and Wall Street were interconnected and as one went so did the other. But in the last twenty or so years, each has gone in different directions and resulting in a change in the financial makeup of the United States.

“Stock ownership among the middle class is pretty minimal,” said Ed Wolff, an economist at New York University who studies the net worth of American families. He added: “The fluctuations in the stock market don’t have much effect on the net worth of middle-class families.”

Wall Street has become more of a casino using algorithms on how the actions of government and corporations will affect stock prices, now and in a few days. Once the probabilities are calculated and computer programs are devised, then stock is bought on margin or financial derivatives are purchased in order to derive double digit returns. Wall Street is pricing stocks and financial derivatives on what the world will look like in the future, whether it be tomorrow or next year. Small business owners on Main Street are just trying to make it their next payroll and have enough cash to pay their vendors. If they can keep their doors open on a week-by-week basis, then it can be considered a successful year.

Will they ever meet again?

For many economists and financial analysts, the big concern is what will be the long-term effect on the American economy on the divergence of Wall Street and Main Street. At one time, both co-existed in a convenient and harmonious manner and helped the American economy grow and prosper. A small business that was able to grow into a big firm was able to make that successful transition with an infusion of capital from Wall Street. The small business was able to grow from a Mom and Pop store into a coast-to-coast enterprise with thousands of workers and pay good dividends to satisfied stockholders. But those days are long gone, since Wall Street has other priorities such as quick returns, huge stock buybacks, and extensive use of exotic financial instruments that few can understand or explain. It is sad to see that those days when Wall Street and Main Street worked together are gone because it resulted in creating the strongest economy in the world for many decades, made jobs for millions of American workers, and provided financial safety and security this nation sorely lacks.