While we hope that the COVID-19 pandemic will end as soon as possible, how will the United States conduct itself on the day after this plague? So that we can examine the general directions leading to the future, let’s go back to the past.

In 1944, Franklin D Roosevelt invited the countries that would later be called the Western Bloc to an agreement in the pastoral town of Bretton Woods, New Hampshire. He offered an “incentive” for states to side with America the day after the war. Roosevelt knew and feared Stalin’s madness and therefore sought to propose a new model the like of which the world had not seen before. The United States—the only nation that would emerge from the war at the height of its power—would give all member countries the freedom to sail the oceans, their goods and services changing hands. No commission would be levied. Transferring goods to Belgium for refining, sending them for wrapping in Germany, and selling them in the US free of charge for security services: this was actually the first model of globalization, turning our world into a very small globe. It featured a new incentive, to open an American market, through reduced tariffs.

In return, the US sought the loyalty of its partners as it took its stance on what would come to be known as the West. The resulting balance (or tension) between East and West held until two factors brought forth a change of reality. The first was the collapse of the Eastern Block in the late 1980s, which eliminated the American need for an alliance. The second factor that would call for a new stage of global policing focused on securing the distribution of energy supplies to the United States, especially from the Gulf states. For this, the need was clear when, with the imposition of an Arab oil embargo on America and other countries, the oil crisis struck in 1973.

The oil shale revolution has brought independence to the United States in terms of energy: the country does not need practical contact with the outside world. Since 2015, it has become an exporter of black gold, no longer having to import as it once did. This change allows America to effectively cut itself off from the world through a gradual retreat from the role of global cop.

To Trump’s credit, as I stated in my book “The Key to Understanding Donald J. Trump,” back in the 1980s he saw the direction things were going. See the open letter he posted at his own expense: 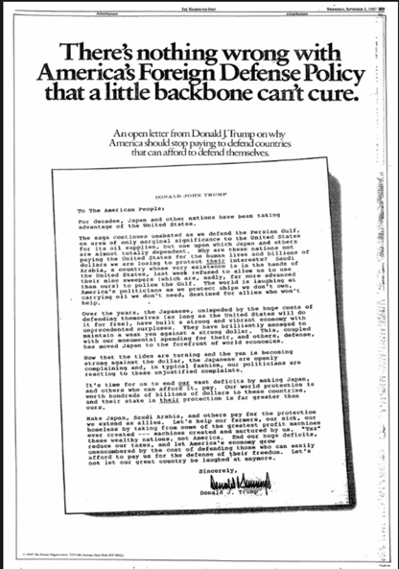 President Trump, who advocates protectionism and AMERICA FIRST policy, has been working since his first day in the Oval Office to liberate the US from the existing agreements which remained as fossils of a reality no longer relevant. The way this works can be discussed according to three main components. So, in what direction is America heading?

It may be noted that the first part of Trump’s activity was to examine and undo the way in which the United States perceived itself in the global system, and the way in which it interpreted the alliances it had since the end of World War II. The United States–Mexico–Canada agreement replaced NAFTA when the next to understand the significance of the new world order were the Japanese and South Koreans.

The only one that did not do so in real time was China, and that is worth discussing. In the future, the plan with the British will be completely closed, and it can be said that the United States is quite closed in its trade portfolio under the improved conditions set for itself by its own actions.

One of the most important issues in President Trump’s current term has been the reduction of regulations and the of corporate taxes. These moves, which took effect on December 2, 2017, lent to the biggest generator of growth for the US and brought the country (as of the beginning of February 2020) to a 50-year low in unemployment rates—for all sectors, ages, backgrounds, and genders—as can be seen from the following short video: https://www.youtube.com/watch?v=QCy8Epk3_H8.

The struggle with China

The struggle with the Chinese has been a major issue for the current administration. Since the beginning of its term, dozens of articles have been written about Americans’ complicated relationship with the Chinese.The battle for hegemony even managed to connect two ideological opposites, former Trump adviser Steve Bannon and journalist Thomas Friedman, as evidenced in the fascinating segment that I highly recommend watching, from the eve of the COVID-19 pandemic, here: https://youtu.be/g1iSNPeQ4tQ.

But this struggle, waged in rolling systems against the Chinese, comes to a boiling point in the context of the pandemic. The outsourcing of American factories that began in the 1990s and accelerated in the 2000s came at the expense of many domestic factories given reduced costs by the Chinese giant. A large part of this expense was also measured in resources significant to the economy. For example, 95% of the antibiotics available in the US are imported from China and India.

The Chinese also took care to threaten the Americans regarding the supply of antibiotics in its official journal, and this drove Americans crazy. It caused Senator Tom Cotton (R, Arkansas) to offer a bill on the subject requiring the return of vital manufacturing plants to America.

China is in serious trouble

Already today, from Jerusalem to Texas, private individuals are demanding billions from the Chinese government.

The day after the pandemic, the countries of the world will sue the Chinese for carelessness and failure to report truth at the onset of the crisis.

Governments will sue the Chinese to pay for the damages inflicted on them, and for the sale of medical equipment that malfunctioned at the height of the plague, as seen in Spain and other places in Europe. But it is important to understand the Chinese situation, from even before the consequences of the corona virus. Note the leverage graph on Chinese debt, which still only shows data reaching up to 2018, since when the debt only increased.

Another boiling point will come in the next decade, when the “children” of the Chinese government’s one-child policy will have to return to the villages and help care for their parents. The next decade will be one in which we see great changes in Greater China, to the point of returning to a period of instability that could even (in an extreme scenario) change the social structure and cohesion.

About the future of the United States

My estimate is that the United States will be one of the first countries to emerge from the global recession. It will accelerate its disengagement from the world, reducing previous arrangements for global policing in case Trump is replaced, or dramatically cutting them if he is re-elected.The world will discover, the hard way, that transporting cargo by sea, in a signal-like atmosphere, and with rising piracy, will increase export inputs (insurance, defense spending, etc.). This will cause countries around the world to try to shrink their supply chains to short and safe ones. The United States, already backed by the new agreements it has sought for itself, will focus on reviving the American economy and on bringing factories home at the expense of Asia in general—and China in particular.

These protectionist policies will allow the American economy to emerge quickly from the recession—at the expense of the rest of the world, which will be left to try and collect fragments after the pandemic’s devastating consequences and the reduction of the global economy.

Kobby Barda is a PhD candidate at the University of Haifa, and head of the Gal Program for political leadership at the Academic Center of Law and Science in Hod Hasharon, Israel. He is the author of the books The Key to Understanding Donald J. Trump and AIPAC’s Grassroots Path to Congress: How Isaiah Kenen Built AIPAC to Be A Powerhouse. He is also scholar of the CHAIKIN CHAIR IN GEOSTRATEGY.

No, Hungary is not leaving the West