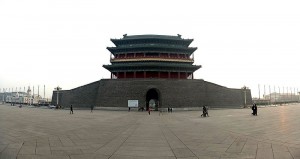 A vehicle plowed through crowds in front of Beijing’s Forbidden City and then crashed and caught fire Monday, killing five people and injuring 38 others, including tourists and security officers, police and state media said.

It was not immediately clear whether the driver deliberately crashed the car. Any incident near Tiananmen Square, which is just outside the Forbidden City, is considered politically sensitive because the square was the focus of the massive pro-democracy movement that was violently suppressed by the military in 1989, leading to an unknown number of deaths. The square is still heavily policed to guard against even the smallest demonstrations, which are occasionally attempted there.

Authorities swiftly cleaned up the scene, first clearing the area of visitors and then blocking views of the wreckage with screens.

Killed in the crash were the three occupants of the car and two tourists — a woman from the Philippines and a man from southern China’s Guangdong province — according to police reports.

The injured were among the crowds in front of the iconic Tiananmen Gate, where a large portrait of Mao Zedong overlooks the southern entrance to the former imperial palace.

The vehicle burst into flames after crashing into a guardrail at one of the ancient stone bridges leading to the gate, said a statement posted on the Beijing police’s microblog.

The statement said the driver veered on the other side of a barrier separating a crowded sidewalk from busy Chang’an Avenue, then drove along the walkway to Tiananmen Gate, across the avenue from sprawling Tiananmen Square.

Chinese Foreign Ministry spokeswoman Hua Chunying, when asked whether the government believed the incident was a deliberate attack, said she did not know the specifics of the case and declined further comment.

The central and city governments held a meeting after the crash to speedily investigate what happened and “ensure the security and stability of the capital,” a government spokesman said.

If the crash was intentional, executing such a maneuver would require skill and determination. The car apparently jumped a curb at a nearby cross street and traveled about a quarter of a mile to the spot where it was said to have caught fire.

Police did not immediately release any information about who was inside the car.

Photos of the scene that circulated on the Internet showed images of a vehicle emitting thick smoke at Tiananmen Gate.

The entrances to the Forbidden City and Tiananmen Square were closed to the public. Stepped-up bag and identity-card checks were being carried out at access points to the gate.

Nearby attendants and concession-stand vendors who were asked about the crash all said they did not clearly understand what happened. Many such employees are generally understood to be part-time police informants.

The area around the square is one of China’s most closely guarded and politically sensitive public venues. Just to the west lies the Great Hall of the People, the seat of China’s parliament, and many of China’s top leaders live and work just a few hundred yards away in the tightly guarded Zhongnanhai compound.

Ukraine's gas imports down 19.8% on year in Jan-Sep