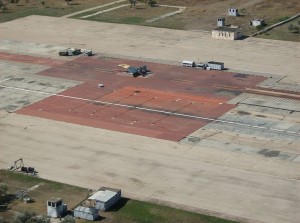 The NITKA military complex, leased by Ukraine to Russia, will reportedly be leased to either China or India. The complex located on Crimean peninsula started operating in 1980, when Ukraine was still part of the Soviet Union. It was built in the vicinity of Saki resort, as part of Novofedorovka airport. NITKA was used for take-0ffs and landings of fighter jets as a training installation for for pilots assigned to aircraft carriers. In 2008, at the time Russia was still leasing it, President Viktor Yushenko forbade utilization of the complex due to ongoing conflict between Russia and Georgia. As a result, Russian government sought alternatives and started construction of its own military base in Eysk (territory of Russian Federation) not too far from Crimea. NITKA stands for “on-land aviation training complex”.

In September 2012, the Chinese fleet added Lyaonin  carrier to its inventory. The carrier, known by its previous Ukrainian name Varyag, was bought from Ukraine for $20 million. On November 16, Russia will transfer its Admiral Gorshkov carrier to the Indian Navy. This allows Ukraine to lease the complex to either China or India. The decision is yet to be made in the Rada (Ukrainian Parliament).
The previous lease agreement had been signed by Ukraine and Russian in 1997, as part of a Ukrainian-Russian Friendship Treaty. The move by Ukraine is unlikely to cause any disagreements from the Russian side. The Russian government had already notified the Ukrainian government about its plans to abandon the lease starting 2014 and transfer Russian Navy’s training program to Eysk.

As far as the abrupt decision of the Russian government to end the lease is concerned, the Ukrainian political analyst Anton Finko considers the move as a smart economic decision based on the idea that sooner or later Russian military will have to leave Ukrainian territory. Hence, the end of the lease is not to be regarded as a measure by the Russians to pressure Ukraine.