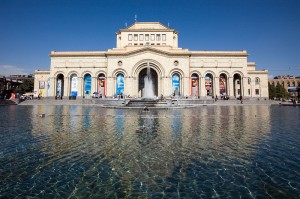 Foreign Minister Ahmet Davutoğlu announced on Dec. 5 that he would be visiting Armenia next week, marking a first diplomatic push since the protocols between the two countries signed in 2009 which foresaw the development of relations, including a decision on opening the borders, was shelved.

Davutoğlu said he accepted Armenia’s invitation to attend a meeting of the Black Sea Economic Cooperation (BSEC) in Yerevan on Dec. 12.

“Turkey is one of the founding members of the organization. Its headquarters are located in Istanbul, where Armenia, which is a member of the organization, also has a representative. I received the invitation and decided to accept it after consulting the president,” Davutoğlu told reporters during a press conference in Ankara.

Davutoğlu met with his Armenian counterpart Eduard Nalbandyan earlier on Dec. 5 during a council of ministers gathering of the Organization for Security and Cooperation in Europe (OSCE) held in the Ukrainian capital Kiev. He also held meetings with his Azeri counterpart Elmar Memmadyarov and Russian Foreign Minister Sergei Lavrov to discuss talks on the thorny Nagorno-Karabakh issue which Ankara considers as key for a thaw in its relations with Yerevan.

Davtuoğlu also said that he would visit Athens on Dec. 13 and Turkish Cyprus the following day.

Madiba: A symbol of the power of good