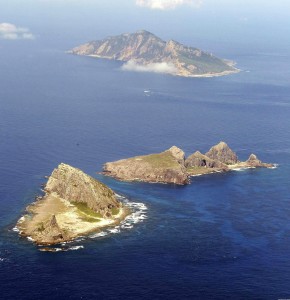 Seoul has moved ahead with building up its defense perimeter around the islands it controls in the East China Sea amid China’s recent announcement on its air defense zone around the Senkaku Islands, known as Diaoyu Islands in China. South Korean zone overlaps China’s newly-announced defense zone. The zone which will be defended by South Korean missile destroyers includes two territorial islands and a submerged reef, called by Koreans Ieodo. On top of the rock stands a tall research station with a helipad. The rock, which is called Suyan by the Chinese, is located 100 miles southwest of South Korea’s Jeju Island.

In late November, China formally announced its claims over Senkaku islands, declaring it was now the air defense zone of China and any aircraft entering the zone must be in communication with China’s air defense. As tensions grew, the United States which retains a military base on Okinawa and Japan which denounces China’s claims to these islands, stated they would recognize China’s sovereignty over these territories. Shortly after China’s announcement, a U.S. B-52 bombers flew over the island in a widely publicized defiance. Japan’s civil aviation also ignored China’s warnings while Vice President Joe Biden expressed discontent of his government to the President Xi Jinping of China during his visit to Beijing. On Friday, Biden also met with South Korean President Park Geun-Hye which can explain why South Korea took this step on Sunday morning. During the press briefing, South Korean Defense Ministry official Jang Hyuk stated that “We believe this will not significantly impact our relationships with China and with Japan as we try to work for peace and cooperation in Northeast Asia,” Reuters reported.