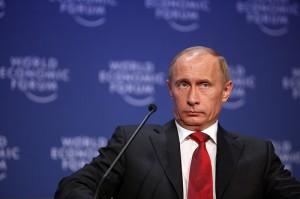 Russian President Vladimir Putin has vowed to rain down “complete annihilation” for the terrorists responsible for two deadly bombings that struck the city of Volgograd this past week. Quoted on January 1, Putin also said that the attacks are an “abomination.” The Russian leader said “Whatever motivated the criminals’ actions, there’s no justification for committing crimes against civilians, especially against women and children.”

After visiting some of the survivors of the blasts in hospital, he laid roses at the scene of the bombing that took some 16 lives on a trolley bus on December 30. He also met with local security officials who are investigating the attacks, one of which occurred  at a train station on December 29. The attacks claimed the lives of 34, while injuring more than 70 people.

Speaking in the city of Khabarovsk on December 31, Putin said he would eliminate terrorists. “Dear friends, we bow our heads before the victims of the terrible terrorist attacks. I am confident that we will fiercely and consistently continue the fight against terrorists until their total destruction,” he said.

Russia has beefed up security throughout Volgograd, amounting to some 5,200 police and Interior Ministry troops patrolling the streets and in public transport conveyances. According to Volgograd Governor Sergei Bozhenov, volunteers are assisting local and national authorities. Said Bozhenov, “Yes, we do today have Cossack volunteers who, together with police, are patrolling the streets,” who added,  “The number of Cossack volunteers is increasing.” Dozens of people have been arrested in raids throughout Volgograd.

Security at the upcoming Winter Olympic Games at Sochi in southern Russia has been thus put into doubt. Sochi is located approximately 400 miles southeast of Volgograd. The games are set to begin on February 7.  The president of the International Olympic Committee, Thomas Bach, wrote a letter on December 30 telling Putin that he is confident Russian can “deliver safe and secure Games in Sochi.”

So far, no group has owned up to the crimes. Both bombings are suspected to have involved suicide bombers. Volgograd is an important transportation hub for travelers headed to Sochi, which lies on the Black Sea.

Volgograd is no stranger to terrorist crimes. Located in the north Caucasus region, it lies in an area now beset by Muslim extremists. In October, for instance, a female suicide bomber detonated a bomb that killed herself and six teenaged passengers on a city bus.

According to a report by VOA,  Andrei Soldatov – an expert on terrorism and intelligence in Russia – the attacks in Volgograd are an effort to distract security forces and to force them to ensure security not only in Sochi, but elsewhere in Russia and the disputed north Caucasus region. “It’s an effective tactic,” said Soldatov, “diverting attention away from a place where the terrorists may be planning their next attack.”  Similarities in the explosives and deadly shrapnel used in the latest blasts have been noted.

The October attack was blamed on a Daghestani woman – a convert to Islam – who had married a Muslim terrorist before killing herself and others. In November, the bomber’s husband and four other suspects were killed by police in in Daghestan. Muslim terrorists have struck similarly prominent targets such as Moscow’s airport and subway. The leader of the so-called independent Caucasus Emirate,Doku Umarov, has called “mujahedin fighters” to attack targets such as the Sochi Olympics.

Among the reasons why Volgograd, a city of 1 million, was attacked is that it is one of the most corrupt regions in Russia where there was a significant purge of communist authorities in the 1980s. It is also planning to host the 2018 World Cup soccer championship. Volgograd was formerly known as Stalingrad, and was where one of the most deadly battles between National Socialist German and Soviet Russia took place during WW2.

Dmitry Trenin, the director of the Carnegie Moscow Center, wrote on the center’s website thatVolgograd remains a symbol of Russia’s tragic triumph and thus was chosen by the terrorists for maximum effect. According to VOA,  Aleksei Malashenko of Carnegie Moscow said that failures by local authorities to beef up security after the October bombing may have encouraged the terrorists. He believes that such attacks can happen anywhere in Russia.

Spero News editor Martin Barillas is the editor of Spero News. He is a former US diplomat, who also worked as a democracy advocate and election observer in Latin America. He is also a freelance translator.