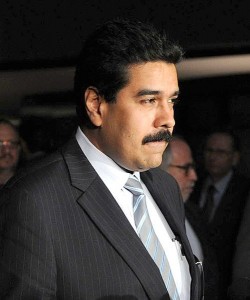 As the public protests continue in Venezuela, the government proceeds with its plans to honor the late president of the country Hugo Chavez.

The new president Nicolas Maduro who took over the leadership of the South American nation last year, holds the status of the previous president high. Chavez’s status of a savior of the nation and socialist reformer is seen almost as a state doctrine to keep the domestic policies undeterred from the course. Maduro succeeded Chavez with tears as he announced the late president’s death on March 5, 2013.

This year, President Maduro is expected to preside over the parade amid the ongoing clashes of security forces with the protesters. The leaders of Bolivia and Nicaragua are expected to appear at the event to commemorate the fallen comrade. The parade in memory of Hugo Chavez is likely to exacerbate the gradually growing discontent among the population due to the fact that the government is believed to have already spent enormous amount of money for the military style parade – the money that could have been spent for public needs.

The eruption of public discontent was caused by the lack of economic opportunities and the failure on part of the new president to address the much needed economic problems since April 2013. Inflation reportedly hit 56% in 2013, making Venezuela home to the highest inflation rate in the Americas. This, in turn, caused shortages of basic goods such as flour and cooking oil. Crime rate increased over the course several months keeping public – afraid of the danger – off the streets

It is unknown at this moment if the protesters will attempt to disrupt the parade by blocking any streets in the capital of the country, but the government seems to be determined to make sure the parade takes place anyway. So far, the government used the tear gas and rubber bullets against the protesters, a huge difference from Ukraine where protesters were massacred en masse by the security forces.

US and Germany discuss options for Ukraine resolution