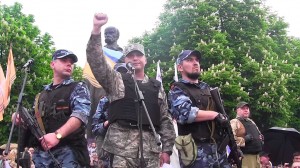 As the Russian-led humanitarian convoy is heading to the embattled Eastern Ukraine, the head of administration of one of the pro-Russian separatist entities, “Luhansk People’s Republic”, Valery Bolotov announced his resignation.

“I decided to temporarily leave the position of the head of Luhansk People’s Republic. The wound does not allow me to commit my full self to this post for the sake of Luhansk people at this difficult war time”, he said, ITAR TASS reports.

He said that he would be appealing to the Minister of Defense of “Luhansk People’s Republic” Igor Plotnitsky with a proposition to replace him becoming the leader of the separatist authorities. He also pledged to continue the struggle for independence despite leaving the formal position and assured the journalists at the press conference that the struggle against the Kyiv government would succeed.

Bolotov then went on to criticize the central Ukrainian government for engaging a total war and using big number of troops and military equipment to suppress the pro-Russian separatists. He underlined the fact that the residents of the breakaway province of Ukraine are facing a humanitarian crisis.

Bolotov had been elected the governor of the separatist entity in April and the head of the breakaway entity on May 18. Before that he was the commander of the “Army of Southeast.” His election was confirmed by the majority of votes in the assembly of the entity. He reportedly suffers from a wound inflicted during an assassination attempt in May which is the purported reason for his resignation.