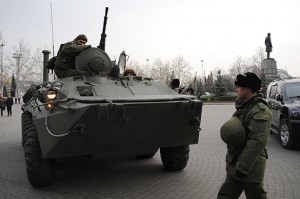 Ukrainian President Petro Poroshenko announced on Friday that the Ukrainian forces had opened artillery fire on the Russian military convoy which had reportedly crossed the border into Ukraine over the previous night.

According to the statement of the president, the majority of the column of Russian military vehicles had been destroyed. It is, however, unknown what the exact number of vehicles were and how many were destroyed. The Ukrainian officials reported early in the morning that the actual humanitarian convoy of 280 trucks destined for the breakaway zone controlled by the pro-Russian separatists, stopped a few miles short of the Ukrainian border. Instead of the humanitarian convoy, a convoy of military personnel carriers reportedly entered the Ukrainian territory. The NATO Secretary-General Anders Fogh Rasmussen confirmed on Friday that the incursion by Russian APCs did indeed take place.

Moreover, the humanitarian convoy reportedly diverted from its originally agreed route (the border checkpoint near Kharkiv, controlled by Ukrainian government) and instead proceeded to the Russo-Ukrainian border, controlled by the separatists.

Officials in Moscow denied that there had been a border incursion and that no Russian vehicles had been destroyed simply because there were none on the territory of Ukraine. The U.S. government has not been able to confirm the Russian convoy was destroyed and has not issued any reaction so far. The incursion was reportedly spotted by Western journalists during the dusk hours.

If it is confirmed that Russian military vehicles crossed the border, Russia would have to face an overwhelming criticism and reaction from the international community which is already decrying the intrusion of Kremlin in Ukraine. By the same token, if the elimination of any military vehicles of the Russian armed forces is confirmed, it would mean a significant escalation in the standoff between Moscow and Kyiv which may graduate the conflict into a full-fledged war.