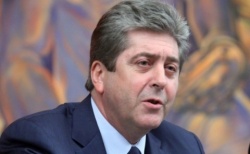 Bulgarian cannot afford to be hawkish in its relations with Russia, President (2002-2011) Georgi Parvanov said on Monday.

Parvanov, who is currently the leader of the Alternative for Bulgarian Revival (ABV), told the guests of a discussion organized by his party and dedicated to Bulgarian-Russian relations.

“We are arguing that the modern architecture of present-day Europe cannot be directed against Russia. We hope that this will be understood by the current European and world leaders, since the challenges posed to big powers and communities are to big [and we cannot] allow such confrontation,” Cross News Agency quoted Parvanov as saying.

He lambasted President Rosen Plevneliev, who took over from him in 2012, over the positions that the current head of state has reiterated on the Russian-Ukrainian standoff.

Parvanov described some of them as “sounding defiant” without any provocation from the other side.

“I fear this line, which met justified criticism and which was voiced in the so-called defense strategy… could appear in the stance of the head of state at the forthcoming NATO summit.”

The previous President’s comments referred to the controversial working paper known as “Outlook 2020” which explicitly situated Bulgaria in an information war with Russia and called the latter a threat to the country’s national security. The text has now been amended and is to be made public before the NATO summit in Wales on September 4 and 5.

Parvanov did not save his criticism for left-leaning ministers (“of Foreign Affairs, Defense and Energy”) within the former socialist-led cabinet, whose behavior in office showed hostility toward Russia.

Bulgaria should stand up for its right to a “more specific” relation with Russia and ABV “is ready to initiate a conversation in this direction,” Parvanov underlined.

He also described Defense Minister Velizar Shalamanov, who has recently come under fire over Outlook 2020, as “Minister of War”, a role “[Shalamanov] assigned himself”.

What will the power shift bring to Turkish politics and to Turkey-Russia relations?