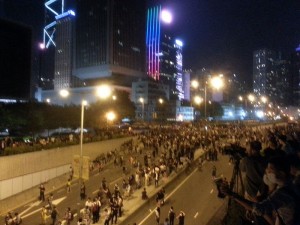 From around 5:00 local time in the morning, the police started a surprise raid in the area when a handful of stay-in Occupy protesters were still sleeping. The police removed tents, bamboo and other makeshift barricades before the protesters could make any resistance.

The Occupy area in Mong Kok is across the Victoria Harbor from the main demonstration areas near the region’s government headquarters in Admiralty and commercial area in Causeway Bay.

A female Senior Superintendent of Police said that the police has received a lot of complaints in the area that the Occupy barricades had brought more dangers to local residents and obstructed emergency access.

The police strongly condemn such irresponsible behaviors, and decide to remove those barricades in the streets to achieve a limited resumption of traffic and reduce citizen’s resentment, the officer said.

As of 7:00, most of the tents and steel fences set by Occupy protesters in Mong Kok had been removed and all subway exits of Mong Kok station resumed normal operation.

Thousands of protesters, most of which are students, joined the Occupy Central movement to express their discontent with a framework set by China’s top legislature on electing the region’s next leader through universal suffrage.

According to Hong Kong Basic Law and top legislature’s decisions, more than five million Hong Kong voters could have a say to who will become the Chief Executive in 2017 by the “one man, one vote” election, which had never been realized under the British colonial rule.

Turkey reinforces along Syrian border to confront IS