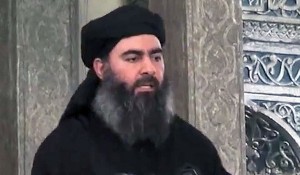 “An air strike targeted a gathering of IS militants resulted in the wounding of Abu Bakr al-Baghdadi and the killing of several senior leaders of the extremist group,” the state-owned Iraqiya news channel quoted an Interior Ministry statement as saying, without giving further details about when and where exactly the air strike took place.

Earlier in the day, a security official from Iraq’s northern province of Nineveh told Xinhua that he could not confirm reports saying an air strike by the U.S.-led coalition targeted a convoy of vehicles near the city of Mosul, the capital of Nineveh province.

“We can’t confirm the news of death or wounding of Abu Bakr al- Baghdadi, because all what we have is our intelligence reports which only mentioned that some 45 IS militants were killed and wounded by the air strikes of the U.S.-led coalition near Mosul late on Friday,” Mohammed Ibrahim, head of security committee of Nineveh’s provincial council, told Xinhua by telephone.

Ibrahim also said that at least two IS senior figures, Libyan and Saudi nationals, were among the dead during the coalition air strikes which destroyed several armed vehicles and positions of the IS militant group.

On Saturday, Colonel Patrick Ryder, a Central Command spokesman, said in a statement that he could not confirm whether IS top leader Abu Bakr al-Baghdadi was in the vehicle convoy consisting of 10 armed trucks.

“I can confirm that coalition aircraft did conduct a series of air strikes yesterday evening in Iraq against what was assessed to be a gathering of IS leaders near Mosul,” the spokesman said. “We cannot confirm if IS leader Abu Bakr al-Baghdadi was among those present,” he added.

Abu Bakr al-Baghdadi, known to his supporters as Amir al-Mu’ minin, is the Caliph of the self-proclaimed Islamic State which announced the establishment of a caliphate on June 29, 2014. The extremist militant group captures the areas in western and northwestern Iraq as well as part of northeastern Syria.

On Oct. 4, 2011, the United States listed al-Baghdadi as a global terrorist and announced a reward of up to 10 million U.S. dollars for information leading to his capture or death. Only the leader of al-Qaida, Ayman al-Zawahiri, merits a larger reward of 25 million dollars.

Al-Baghdadi is believed to have been born in 1971 in Samarra in central Iraq, according to a biography that circulated on Islamic Internet forums in July 2013. He obtained a BA, MA and PhD in Islamic studies from the Islamic University of Baghdad.

The IS is an al-Qaida breakaway group, and Abu Bakr al-Baghdadi was announced to be its leader on May 16, 2010, following the death of his predecessor Abu Omar al-Baghdadi.