India’s nuclear industry has been largely without IAEA safeguards, though four nuclear power plants have been under facility-specific arrangements related to India’s INFCIRC/66 safeguards agreement with IAEA. However, in October 2009 India’s safeguards agreement with the IAEA became operational, with the government confirming that 14 reactors would be put under the India Specific Safeguards Agreement by the end of 2014.

A clean waiver to the trade embargo was agreed in September 2008, when India and the United States finalized an agreement/deal, to restart cooperation on civilian nuclear technology. The new agenda of cooperation intended at preparing India as a new powerful state in the globe and it has also numerous aspects containing economic, strategic and energy components. On the other hand, the civilian nuclear deal which is component of the particular dialogue gained more consideration because of its adverse implications for the international Non-Proliferation regime efforts and on the security of South Asia. Because of the agreement, the India would gain the status of de facto nuclear weapon state and it would assist India to acquire civil nuclear technology from the US and other members of the NSG. The NSG is a 48-country network of uranium and nuclear technology-exporting and civil Nuclear power producing countries aimed at strengthening civilian nuclear markets while propagating a strict non-military purpose.  After giving India an exemption it seems this group is following a non-criteria approach by giving exemptions to some (India) and objecting some of the others (Pakistan) on the same grounds.

The legislation allows for the transfer of civilian nuclear material to India. Under the deal India has committed to classify 14 of its 22 nuclear power plants as being for civilian use and to place them under IAEA safeguards. “Safeguards are the activities by which the IAEA can verify that a state is living up to its international commitments not to use nuclear programs for nuclear- weapon purposes”. While pledging that any U.S. assistance to its civilian nuclear energy program will not benefit its nuclear weapons program, India committed to, among other things, separating its civilian nuclear facilities from its military nuclear facilities, declaring civilian facilities to the International Atomic Energy Agency (IAEA) and placing them under IAEA safeguards.

A significant proportion of India’s nuclear complex, including 8 PHWRs: Tarapur III & IV, Madras I & II, and Kaiga I—IV will remain outside IAEA safeguards, their joint capacity have 2350 MW of electricity generation capacity and could produce about 1250 kilograms of reactors-grade plutonium every year. Several essentially civil nuclear power reactors, the new 500 MWe fast breeder reactor at Kalpakkam, and the small enrichment plants for naval fuel remain outside IAEA safeguards. For almost 30 years, the U.S. legal standard has been that only nuclear safeguards on all nuclear activities in a state provide adequate assurance suddenly changed.

A significant question is how India, in the dearth of full-scope safeguards, can provide adequate assurance that U.S. nonviolent nuclear technology and uranium import from the other countries will not be sidetracked to nuclear weapons purpose,  because apart from not being a signatory to the Nuclear Non-Proliferation Treaty (NPT), India’s dual-function nuclear program (military and civilian) is greatly interwoven. India has opted to not fully disclose the suspected dual-use nature of some of its reactors. 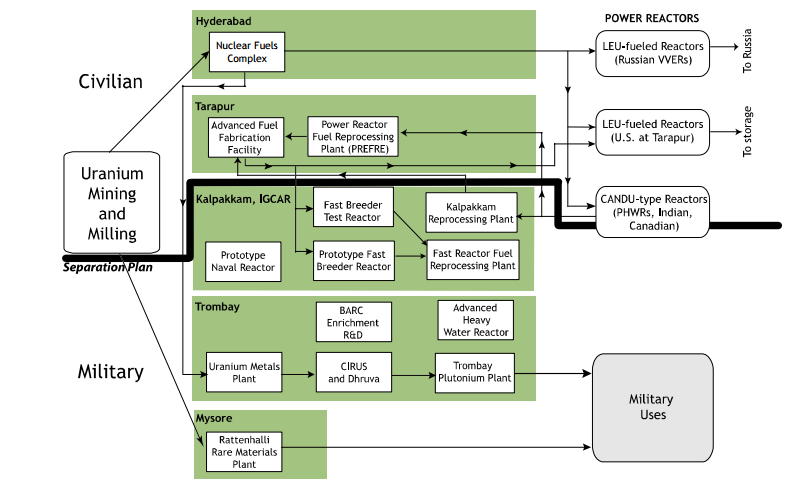 The above figure shows the separation plan of Indian civilian and military nuclear program which is very much inter-woven that it is nearly impossible to be separated. The key elements of India’s separation plan are, eight indigenous Indian power reactors (RAPS 3, 4, 5, 6; KAPS 1, 2; NAPS 1, 2) in addition to 6 already under safeguards; future power reactors may also be placed under safeguards, if India declares them as civilian. Some facilities in the Nuclear Fuel Complex (e.g., fuel fabrication) will be specified as civilian in 2008 and nine research facilities and three heavy water plants would be declared as civilian, but are “safeguards-irrelevant.” Eight indigenous Indian power reactors (Kaiga 1, 2, 3, 4; MAPS 1, 2; TAPS 3, 4), Fast Breeder Test Reactor (FTBR) and Prototype Fast Breeder Reactors (PFBR) under construction, enrichment facilities, spent fuel reprocessing facilities (except for the existing safeguards on the Power Reactor Fuel Reprocessing (PREFRE) plant), research reactors: CIRUS , Dhruva, Advanced Heavy Water Reactor, three heavy water plants and various military-related plants (e.g., a prototype naval reactor) were not on the separation list.

Comparing it with Pakistan, the first nuclear power reactor of Pakistan is a small 137 MWe, Canadian pressurized heavy water reactor (PHWR) which started up in 1971 and which is under international safeguards – KANUPP .The second unit is Chashma 1 in Punjab province in the north, a 325 MWe (300 MWe net) two-loop pressurized water reactor (PWR) supplied by China’s CNNC under safeguards. It started up in May 2000 and is also known as CHASNUPP 1. Designed life span is 40 years. Construction of its twin, Chashma 2, started in December 2005. A safeguards agreement with IAEA was signed in 2006 and grid connection was in March 2011, with commercial operation in May. Upgrades have added 5 MWe since (to 330 MWe gross). These are built using international design codes and standards.

Pakistan is not party to the Nuclear Non-Proliferation Treaty but does have its civil power reactors and two research reactors (PARR 1&2) under item-specific IAEA safeguards. An agreement for two further 340 MWe reactors came into force in April 2011.

Experts say India could use the imported nuclear fuel to feed its civilian energy program while diverting its own nuclear fuel to weapons production. India has done similar things in the past; India claimed it was using nuclear technology for civilian purposes right up until its first nuclear weapons test in 1974. So, if IAEA get its way in India than all nuclear facilities should be under IAEA despite of selected cases by Indian nuclear authorities. Ever since the U.S. pressurized NSG in 2005 to create an exception for India, a non-NPT state, allowing U.S. to sign nuclear agreement with India, it has lost its credibility (both the NSG and the U.S.).

India’s 14 ambiguous nuclear reactors in comparison with Pakistan’s all reactors under IAEA Safeguards represents the validity of Pak commitment to global nuclear order, even which is a system of inconsistent rules, and norms established by a selected powerful countries to serve their national interests.

Shahzadi Tooba Hussain Syed works at Strategic Vision Institute in Islamabad. He can be reached at [email protected]

Armenia and Azerbaijan at each other's throats again