In early January, 2016, Johns Hopkins University, under the leadership of Prof. Steve H. Hanke (an American Applied Economics Professor), published its annual World Misery Index which has ranked Venezuela as the World’s Most Miserable Country.

The South American Nation has championed the World Misery Index for three consecutive years; Caracas continues to lack effective economic policies and has been hit hard by inflation, corruption and unemployment.  Such a ranking is based on a summary generated by unemployment rate, lending rate, and the inflation rate, minus the annual percent change in real GDP per capita.  Maduro’s Government leads the world misery ranking due to its spiking inflation and a laundry list of obstacles that his government has been facing since the passing of Hugo Chavez Frías.

According to Professor Hanke, President Reagan’s privatization expert, “the only way to permanently fix Venezuela’s money mess, which has been going on for many years, is to dollarize. That politician or political movement that does this will win the prize and stands a good chance of remaining in power for many years.”

Another remarkable change is that Brazil has replaced Argentina and it is ranked the second after Venezuela, Brasilia’s negative performance has increased up to 23.8 points since 2014, due to the country’s interest rates.  The principal reason for its standing as one of the two top countries with a high misery level is the country’s interest rates.

According to Prof. Hanke: “When interest rates are the major contributing factor to the Misery Index, it implies that the banking system is either not competitive, or there is a great deal of credit risk and uncertainty about inflation — or both.”  Prof. Hanke brings to the attention that Panama, El Salvador, and Ecuador — “the dollarizers,” as he names these countries — “continued to do relatively well this year, although Ecuador is showing signs of economic deterioration; “the government of Rafael Correa has adopted a socialist-interventionist model. This is a formula for failure. If Ecuador was not dollarized, it would be closely following Venezuela towards the bottom of the abyss.” 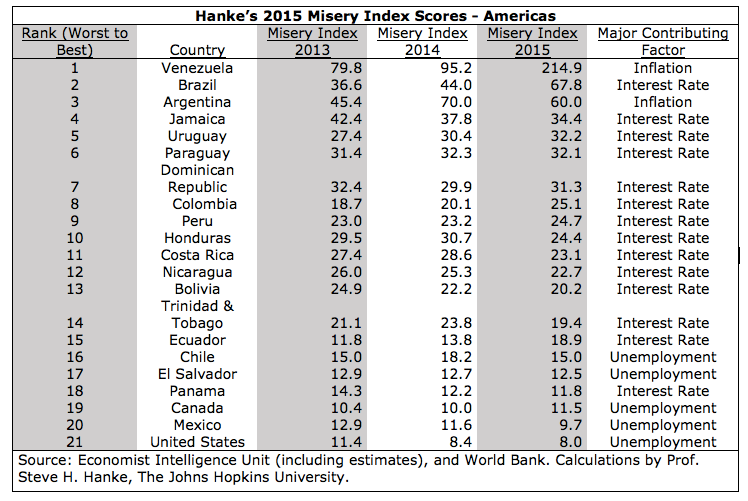 In regards to the other nineteen countries of the Americas, Prof. Hanke states that those who got a score of over twenty in the Misery Index — Paraguay, Colombia, Uruguay, Honduras and Peru —  need “serious structural economic reforms, including a major overhaul of its monetary and banking regime, as well as a good dose of free-market reforms.”

In conclusion to his remarks, Professor Hanke notes that: “In the world of economic reforms, one has to be big and bold. The best way to proceed is to adopt a foreign currency (i.e. dollarization), or clone a sound foreign currency via a currency board.” Moreover CATO Institute’s economist emphasizes the fact that Latin America “failed to make headway while the sun was shining. Yes, Latin America failed to reform and become modern during its ‘boom’ years. Now, the region will pay the price.  Indeed, there are many headwinds in the region. Indeed, 2016 could prove to be a very difficult year, and the 2016 Misery Index scores could be worse than this year’s.”