Nukes of North Korea are a matter of concern for South Korea, Japan and the US. North Korea has been testing ballistic missiles for the past few years, stepping up the frequency recently. In 2016, North Korea performed two nuclear tests and several missile launches to glint international outrage. Many arms control experts consider that, by 2020, North Korea could have the capacity to launch a miniaturized nuclear device on an ICBM, with the range to strike at least the West Coast. It might even have that capability now as North Korea fired four ballistic missiles on 6th March, 2017, into the sea off Japan’s northwest early on Monday, South Korean and Japanese officials said, days after it promised retaliation over US-South Korea military drills it sees as a preparation for war.

Unquestionably North Korea’s nuclear issue is the Trump’s first and foremost foreign policy challenge. This ability would present a direct threat to the United States and could punch a hole in the U.S. nuclear umbrella in Asia: Japan and South Korea. According to South Korea’s military said the missiles can reach the United States. The missiles flew on average 1,000 km and reached a height of 260 km. Subsequently Tensions on the Korean peninsula have heightened especially after Pyongyang performed series of ballistic missile tests soon after US President Donald Trump took office.

In earlier period,  just as North Korea tested the Barack Obama administration after he took office by undertaking missile and nuclear tests in 2009, Kim as well might do the same another way to test the Trump administration. North Korea tested the new administration in Washington for a second time by simultaneously launching four ballistic missiles, which Pyongyong claims can be mounted with nuclear warheads. In a New Year’s Day speech, Mr. Kim said his country had reached a “final stage” in preparing to conduct its first test of an ICBM. That drew a Twitter post the next day from Mr. Trump that said, “It won’t happen!” he rejected Pyongyang’s capability to hit the US mainland with a missile mounted on a nuclear warhead. North Korea has since warned that it could test-launch an ICBM “anytime and anywhere,” in its first challenge to the new American president.

Adding fuel to the fire, the US and South Korea instead to negotiate with North Korea, conduct large-scale joint military exercises every year. This is also the reason why North Korea feels insecure and acts in a provocative manner. According to the Yonhap News Agency, the US-South Korea annual joint drill, codenamed “Foal Eagle,” (which has been condemned by the North as a “rehearsal for invasion”) consist of 10,000 US troops, US aircraft carrier USS Carl Vinson and 290,000 South Korean troops, and will continue until the end of April. In 2016 and 2015, North Korea also launched several missiles and rockets to retaliate for the “Foal Eagle” annual drills. 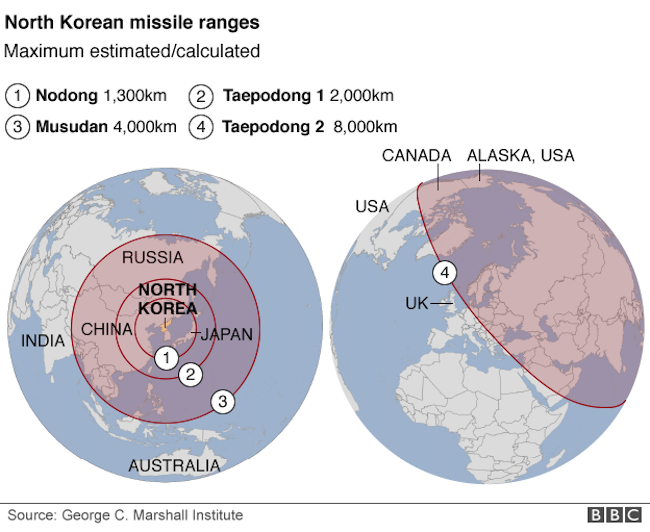 As expected North Korea’s ICBMs are strongly condemned by the UN Security Council along Japan, South Korea and US. The UN Security Council has imposed a number of tough sanctions, but North Korea remains undeterred by international rebukes.  Every time new sanctions are imposed, Pyongyang has responded by accelerating its weapons development programs through testing numerous land-based and submarine-launched ballistic missiles. Even China threatened suspending coal imports from North Korea for the rest of the year in response to the test. Even if Beijing did enforce comprehensive sanctions, Kim would respond by doubling down on his nuclear weapons program. Targeted sanctions can slow proliferation somewhat, but wholesale sanctions designed to change North Korea’s calculus have never worked and never will.

From Kim’s stand point, possession of nuclear weapons is the only deterrence to its security, and this survival strategy is unlikely to change. One can hope that sooner or later, the US would have to acknowledge North Korea’s nuclear status and abandon pursuits of other options, such as regime change; as such a course would involve huge financial costs to China, Japan, Russia, South Korea, and the US.

Trump would find his hand clipped, giving a leeway to Pyongyang to continue its nuclear program, if he seeks more sanctions on North Korea. If Washington acts now by imposing harsh new economic sanctions or undertaking preemptive military strikes are not the right approach to deal with the dangerous situation. But neither option would end well.  The option of imposing sanctions will further insecure Kim’s administration leading to towards the completion of a nuclear-tipped intercontinental ballistic missile. If the United States unilaterally bombed North Korea, its alliance with the South might be the first casualty. None of the alternatives to a deal—doing nothing (waiting for North Korea to collapse), doing too little (relying on China to impose sanctions), or doing too much (starting a second Korean War)—holds any promise for success.

It is now right time that Trump has to seek means to engage in serious diplomatic negotiations with it. Otherwise Trump presidency, North Korea’s nuclear and missile development would remain a critical issue. In order to convince Kim to freeze or at least slowdown the development of North Korea’s nuclear weapons and the missiles that carry them, Washington will need to design a package of security guarantees and political incentives, along with the practical means to verify Kim’s compliance. Trump could offer to scale back or suspend U.S.–South Korean military exercises and delay the deployment of new U.S. military assets to the Korean Peninsula. As long as the diplomacy moved forward, the United States should safely postpone these military moves.

Looking back the pages of recent history, in January 2016, a few days after North Korea’s fourth nuclear test, Trump said of Kim: “This guy doesn’t play games, and we can’t play games with him, because he really does have missiles, and he really does have nukes.” Trump was right. Like it or not, North Korea’s nukes are a reality. The United States needs a new strategy for dealing with Kim—and Trump is well placed to deliver it.

Saima Ali is a Research Associate at Strategic Vision Institute and can be reached at saima@thesvi.org

Why do some men rape?