It is the second most common cause of death in children under the age of five years old with 14% of child deaths arising from preterm. In addition, preterm birth also increases the risk of death in children due to other causes, especially from neonatal infections. With a few other countries.  China has been suggested to have a high death rate of childhood under five years old. The incidence of preterm birth was estimated to be 11% of all live births worldwide in 2010. However the cause(s) of preterm birth in China in many situations still remains elusive. This is because many factors appear to be associated with the causes of preterm birth. Without this information, reducing the incidence of preterm birth is a challenging proposition. [3]

The incidence and the causes of preterm birth have also been suggested to vary depending on the ethnicity of the population and geographical region. Shows the estimated mean preterm birth rates for Millennium Goal Regions in 2010, which ranged from 7.2%for Eastern Asia to 13.6% for Southeaster Asia. The estimated ratefor China in 2010 was 7.1%, which was considerably lower thanrates for Indonesia (15.5%), India (13.0%) and the US (12.0%) andcomparable to those of Ireland (6.4%), Australia (7.6%), Canada(7.8%) and the UK (7.8%).In addition, spontaneous preterm birth is more commonly occurred in Caucasian women, whereas PROM is more common in African American women[4]. Whether ethnicity is associated with the incidence of preterm birth is not fully understood.To date only a few studies have reported the incidence of preterm birth in China. However most of these studies focused on prediction biomarkers of preterm birth and perinatal morbidityand mortality. Reports studying the incidence andcauses of preterm birth in China are limited. This prompted us toretrospectively collect detailed data on medical indications for preterm birth in Shanghai, China at an Obstetrics and Gynaecology university teaching hospital. Shanghai is one of the wealthiest cites inChina, and thus has a more well-resourced health-care system and apatient population that is more informed about antenatal care andchildbirth, making it more comparable to western health-care systems, and thus allowing us to draw associations from ethnicity morethan socio-economic status [5].

Obstetrics and Gynaecology teaching hospitals in China, serving a diverse urban and rural population. In this study, data on all pretermbirths in The Hospital of Obstetrics and Gynaecology were collected from January 2010 to December 2012 according to the medical recordsof mother. Data included clinical characteristics of women with preterm births such as maternal age, gestational week at childbirth,parity, Apgar score at five minutes, birth weight, indications for preterm births and mode of childbirth. Fatal anomalies were also included in this study. All women with stillbirth were excluded from this study [6].

All the multiple pregnancies were included in the category of medical indications and not included in the category of spontaneous preterm birth. Preterm birth was defined a Preterm birth was defined as birth of the fetes at less than 37 completed gestation weeks following the WHO guideline. It was stratified into 33 to less than 37 weeks, 28 to 32 weeks and less than 28 weeks based on gestational age. PROM was defined as spontaneous rupture of the membranes at less than 37 weeks at least one hour before the onset of contractions. Infection was defined from the results of laboratory findings. Statistical difference in the incidence of preterm births over study period was assessed with a χ2-test using the Prism software package. P-values of o0.05 were considered significant and 95% confidence intervals were estimated for percentages [8].

Perinatal mortality and morbidity are associated with pretermbirth. Although infant survival after preterm birth is continuallyimproving, preterm birth is still the second cause of death in childrenunder five years old worldwide. In this study usingthe World Health Organisation definition of preterm birth as less than37 completed gestational weeks, our data shows an overall pretermbirth rate from 2010 to 2012 of 6.8% in the largest university Obstetricsand Gynaecology teaching hospital in Shanghai, the largest city in China. Our data also shows that there was a decrease in the annualpreterm birth rate in 2011 and 2012 compared to 2010. This overallpreterm birth rate is slightly lower than the rate estimated byfor China in 2010, and low compared to theestimated rates as shown in the table below. 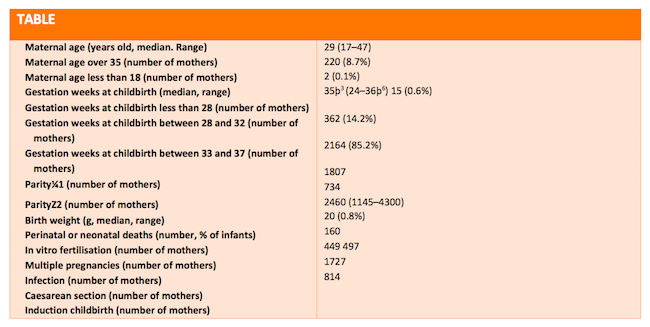 Conclusion and clinical implications for practice

We confirmed that the preterm birth rate was low in the studysetting and found that the leading primary cause of preterm termbirth was medical indications. Most preterm births occurred between33 and less than 37 weeks gestation. Although this study was performed in Shanghai, China and future study is required, our datasuggest that ethnicity may be a factor for the lower preterm birth rate.Therefore the clinical professionals may need to consider the difference of the causes and gestational week in the preterm labour inChinese women who lives in countries other than China. [10]

The modern worker's dilemma: Why are wages falling?

Why fear and self-hatred destroy human sharing and solidarity