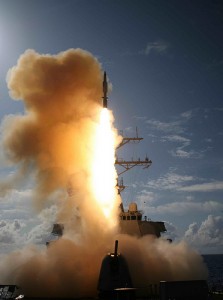 Russia has been beefing up its military to reclaim its status of a superpower. With a sharp increase from $56 billion in 2009 to $61 billion in 2011, it is planning to address multiple issues seen strategic for the foreign policy of the Russian Federation.

Apart from the 2011 purchase of French Mistral helicopter carriers, Russia announced in January that the arsenal of the Strategic Missile Troops of the RF will be substantially increased with new sophisticated weaponry able to overcome any missile defense systems available out there. The plan intends to finalize the updated missile defense in 2018-2020. According to Russian defense ministry official, the development of the rocket complex system has already started and is likely to begin operating in 2015. The announcement came amid the development of another rocket complex for silo-launches of liquid  intercontinental ballistic missiles weighing 100 tonns, was declared by the ministy officials early on.  (Newsru.com, January 6, 2011.)

Additionally, Russia pursues development of newer rocket complexes close to the European borders, as a response to installation of missile defense and interceptors in Eastern Europe. Two divisions of Strategic Missile Troops will be supplied with newest rocket systems Yars equipped with RS-24 intercontinental ballistic missile. Ivanovo military base has already received updates to its arsenal. The defense ministry spokesperson for SMT, Vadim Koval stated that Teykovo regiment deployed in Ivanovo oblast will be completed by the year end; rearmament of Novosibirsk and Kozelsk divisions in Kaluga oblast will commence.

The increase in military expenditures foresees enhancement of strategic Arctic brigades of ground forces, designated to withstand a potential conflict in the northern borders of the Russian Federation. According to Lietenant Colonel Sergei Vlasov, 46 more arctic brigades of infantry and 70 rocket, artillery and engineering brigades will be formed in 2012. Bold move for enhancement of the armed forces in its northern periphery was approved resolution of the Security Council of Russian Federation from September 2008, intending to modernize and modify the content of the forces in the north by 2020.  The resolution was triggered by a series of disputes over natural resources on the sea bed of the Arctic Ocean between Russia and other northern nations  (Newsru.com, January 6, 2011).

Russian considers Lomonosov Ridge, discovered by Soviet archeologists in 1948 as its own, but UN has so far refrained from approving Russian claims to the territory.