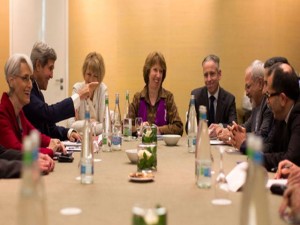 The nearly achieved breakthrough in the six-party talks in Geneva, which are focused on the Iranian nuclear program, caught Moscow by surprise and signified a serious setback for Russia’s foreign policy. President Vladimir Putin tends to believe that he is, indeed, the most influential statesman in the world. But last Saturday, Foreign Minister Sergei Lavrov barely managed to arrive to Geneva in time to call attention to the remaining differences between Iran and the United States (Kommersant, November 9). The proposed partial lifting of Western sanctions on Iran does not suit Russian interests. Yet, unlike Israel, Moscow cannot deprecate the emerging agreement. Undercutting the negotiations would be incompatible with Russia’s claimed role of protagonist of stability in the Middle East, and so Lavrov is forced to stand behind US Secretary of State John Kerry’s budding success.

A comprehensive solution to this long-looming problem of Iran’s nuclear program is still, certainly, a long way off. But the first step—spearheaded by Western efforts rather than Moscow—has revealed Russia’s disappearing influence in the Middle East and deepening isolation in Europe. Accordingly, Lavrov and Putin’s last diplomatic triumph of rescuing Syrian leader Bashar al-Assad from the threat of US missile strikes by forcing him to give up his chemical arsenals was an exception that proves this general rule.

Besides leaving Russia on the margins, the Iran deal, which could be fully finalized before the end of the month, threatens to impact the global oil market, shaving perhaps $10 from the oil price, which has been slowly sliding down toward the psychologically important benchmark of $100 per barrel (Vedomosti, November 5). This would deliver a severe blow to the petro-rent-dependent Russian economy, which has slowed to a stagnant crawl so that the Ministry for Economic Development had to cut its long-term forecast predicting an average growth for Russia of 3.1 percent to 2020 (RBC Daily, November 8).

Prime Minister Dmitry Medvedev still entertains the rhetoric of “modernization,” but the investigation of money flows through his pet project of the Skolkovo high-tech industrial park guarantees that instead of a “wonder-village” it will remain what exiled economist Sergei Aleksashenko calls a “silicon desert”. Putin keeps instructing his tame oligarchs to invest more in the domestic industry, but statistics show instead a steady outflow of capital and, in particular, an increase in purchases of real estate in Europe.

This economic under-performance undercuts Putin’s pretenses for securing for Russia a position of high authority among the powers effectively executing global governance. His aides give high marks to themselves for managing the chairmanship of the G20 this year, but omit mentioning that the harsh treatment of the Greenpeace activists who dared to protest against Gazprom’s drilling in the Arctic has undermined the positive impression from the summit in Strelna, St. Petersburg that occurred earlier (Kommersant, November 6). The Kremlin is now preparing to preside over the G8 next year by focusing on the issues of tax evasion and corruption. However, Putin’s administration can hardly comprehend that every punishment meted out to Nadezhda Tolokonnikova, the leader of the rebellious punk rock band Pussy Riot, adds another international disgrace to Russia’s already compromised legal system (Novaya Gazeta, November 8). Neither can the authorities figure out the damage done to Russia’s profile by the state-sponsored homophobia and aggressive xenophobia.

Putin certainly understands that Russia is becoming an outcast among the liberal democracies and is unhappy about Germany turning so firmly anti-Putinist, but he expects to compensate for this ostracism by expanding ties with China and networking with other “emerging powers.” Moscow assumes that the latter are impressionable to demonstrations of military might, hence the periodic “showing of the flag” by a few deployable destroyers in the Eastern Mediterranean or the trans-Atlantic flight of a couple of Tu-160 strategic bombers to Venezuela last week.

Defense Minister Sergei Shoigu, who has just marked his first year in the job, knows too well that such demonstrations cannot camouflage the deep problems with an under-reformed army bedeviled with conscription issues (Moskovsky Komsomolets, November 6). Responding to political orders, Shoigu prioritized the building of a new military base on a barren island in the Arctic, so more supplies have been shipped there than to Yakutia, where an emergency “winter-is-coming” situation has suddenly been discovered.

Every attempt to show off Soviet-built muscles exposes their embarrassing feebleness, much the same way as every decision to squash domestic opposition backfires in pushing dozens of blogosphere rebels into real-world protests and in triggering a new wave of international outrage. Thus, ecologists become the allies of hipsters and gay-rights defenders. Putin’s subordinates cannot explain to their boss how their zeal in acting on his irritations has made the name of Alexei Navalny familiar to over a half of Russians or made Pussy Riot’s Tolokonnikova the most famous Russian woman in the world. In three months, her grossly unjust sentence will expire, and in a few more months, Mikhail Khodorkovsky, the most well-known Russian political prisoner, who has grown to a high moral authority among dissidents of different persuasions, will walk free after eleven years behind bars. And yet, the Kremlin camarilla does not recognize its own re-energizing influence on the protest movement.

Struggling to keep his international profile inflated, Putin has staked a great deal on blocking Ukraine’s intention to sign an association agreement with the European Union. After that, he expects that the pomp and fanfare of the 2014 Winter Olympic Games in Sochi will erase all stains on Russia’s image. He refuses to see that Russia’s crude pressure on Kiev makes it imperative for President Viktor Yanukovich to accept the conditions set by the EU. He also remains in denial about the organizational disaster in Sochi, which has become synonymous with police heavy-handedness, ramshackle construction and rampant corruption. The Kremlin has no interest in or time for Iran or Syria except when jumping on a rare opportunity to exploit disagreements between the increasingly disagreeable parties to the Middle Eastern dis-concert—all for the sake of asserting Russia’s relevance. In real terms, however, relevance can only be established by readiness to invest in solutions, whereas Putin’s typical arrogance inevitably diminishes Russia to international irrelevance.