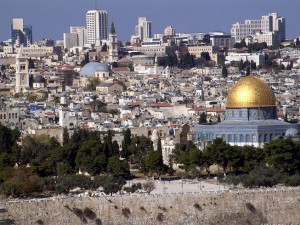 As the holiday of Hanukkah – the festival of lights – came to a close last week, it is worth considering Israel’s strategically important partnership with the ‘land of fire’: Azerbaijan. The only Muslim majority country to have friendly, sustained and substantive relations with Israel, Azerbaijan is not only a beacon of religious tolerance with a historical and currently thriving Jewish community, but also an important geopolitical partner just to the north of Iran.

Israel and Azerbaijan cooperate closely in the defense and energy spheres and both share disquiet over the recent Western rapprochement with Tehran. Iran has threatened to annex Azerbaijani territory and bomb its energy infrastructure. Azerbaijani authorities have foiled Iranian-sponsored terrorist plots in their country. So, Israel and Azerbaijan have developed a joint venture to produce drones and Israeli defense contractors supply the Azerbaijani military with state of the art equipment. In return, Azerbaijan’s state energy company, SOCAR, is active in helping to develop Israel’s offshore natural gas fields, while much of the oil imported to Israel is from Azerbaijani reserves.

Due to the ‘miracle of oil’, Azerbaijan has been able to develop and distinguish itself as a ‘Dubai on the Caspian’, spending its energy wealth wisely and emerging as an international player of outsized stature in the former Soviet space. When Russian President Vladimir Putin visited recently, he showed uncommon respect to Azerbaijan’s President Ilham Aliyev and was not able to pressure Azerbaijani leaders the way Russian has done in Georgia, Ukraine and even with the United States over Syria. Azerbaijan recently served on the UN Security Council and is very active in a number of other international fora. And, its leaders do not hide their amity with Israel: Azerbaijan’s foreign minister visited Jerusalem this year and on another visit to Washington DC made a point of addressing pro-Israel Jewish organizations.

In Azerbaijan, it is not just the secular state that emphasizes good relations with Israel and discourages anti-Semitism. When asked, average Azerbaijanis express admiration for the accomplishments of the State of Israel and warm opinions about Jews in their country and around the world. Many Azerbaijani tourist guides will make a point of showcasing a major new synagogue in Baku, the country’s capital. President Aliyev regularly congratulates the Jewish community on days of religious significance and when the country’s religious leaders gather, rabbis congregate with imams and priests.

It behooves Israeli leaders and Jewish communities around the world to encourage this relationship, especially now that historical ties to Turkey are in tatters. In fact, Azerbaijan is now the largest outside investor in Turkey, due to a major pipeline project, and it is increasingly wielding influence in the greater Levant region. Azerbaijan is keen to become a technological and telecommunications hub for the Eurasian continent, so Israeli companies could seek partnerships for innovation in that sphere as well as others. Overall, as the nuclear and regional threat from Iran continues to loom large for both countries, Israel and Azerbaijan should continue to provide for their own mutual defense, strengthening an already substantive partnership amongst small nations that know how to seize the initiative.

Dr. Alexandros Petersen is the author of The World Island: Eurasian Geopolitics and the Fate of the West and co-editor of ChinainCentralAsia.com.