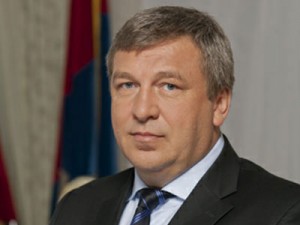 The Russian Minister of Regional Development Igor Slyunyayev stated that the government should encourage citizens of Russian Federation of Russian ethnicity to relocate to its territories bordering neighboring states. In his opinion, the cities and settlements densely populated by ethnic Russians can prevent inflows of immigrants. The statement was made during the conference of the All Russian Popular Front called “Activities forum” on December 4.

Slyunyayev offered that this is a good solution for “how to retain the big territory by minority population”. In many parts of the Russian Federation, the border districts are densely populated by minority ethnic groups who retain an overwhelming majority over the ethnic Russians. Federal entities of the federation in North Caucasus have various ethnic groups who have a growing tendency to express their discontent against Moscow’s policies. Moreover, the eastern Russian territories face a problem of increasing immigration from China and countries of Indochina.

However, the Minister of Regional Development failed to offer the exact plan on how to motivate massive relocation of ethnic Russians from central parts of the country to move to border districts, or which districts would have to be selected for resettlement policies.

Intolerance against immigrants in Russia has been on the rise in the last few months.