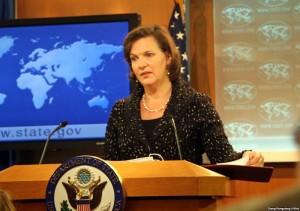 The U.S. Assistant Secretary of State for European and Eurasian Affairs Victoria Nuland arrived in Kiev on Thursday for a two-day visit. The diplomat is in the country to meet with the President Yanukovich, acting Minister of Foreign Affairs Leonid Kozhara, opposition leaders and representatives of civil society.

The apparent item on the agenda is to discuss the deteriorating situation in Ukraine and a range of political issues, including Ukraine’s economic development and integration in Europe. Nuland is expected to hold a press conference at the end of her visit on Friday.

In the midst of the diplomatic efforts to mediate the political standoff between the government and opposition, Nuland’s embarrassing recording came online right in the middle of her visit to the country. The recording uploaded to YouTube is gaining thousands of listeners by the minute.

It is a frank conversation between Victoria Nuland and Geofrey Piatt, the U.S. Ambassador to Ukraine, in which the diplomats discuss what seems to be their leverage over the domestic affairs of Ukraine by allowing or preventing opposition leaders into the Ukrainian government, namely Arseniy Yatseniuk and Vitali Klitchko.

The recording which is an obvious edit of a longer version of the recording is posted around the web in an effort to show that the United States government – contrary to its statements of non-interference in domestic affairs of other states – is intervening in political processes in the Ukraine and to label it “the sponsors” of the ongoing opposition protests. The YouTube posting itself is uploaded under the title “Марионетки Майдана” which literally means the “Puppets of Maidan.”

The State Department has not formally confirmed the authenticity of the leaked recording yet, but U.S. officials have started blaming Russians for the leak. The spokesperson Jen Psaki has already stated that Nuland has reached out to the European leaders with an apology for her leaked statement.

Two things should immediately be taken into consideration. First and foremost, this looks like a planned response to the United States which along with Europeans has been bashing the Russian government for interfering in domestic affairs of Ukraine and diverting Kiev from the path to integration with Europe.

Second, and considering Russians must have been eager to respond at one time or another, Nuland, Pyatt and any other given diplomat on the Ukrainian soil should be careful with communication channels. At the very least, knowing Moscow’s invisible hand in Kiev’s U-turn towards Russia, the U.S. should realize that the operation of not letting Ukraine join the Eastern Partnership and eventually become a member of EU, must include the the whole nine yards of support to the Yanukovich government, stopping the riots by use of excessive force, if needed and undermining counteractions by U.S. and European diplomats.

Nuland who used “F#$% the EU” phrase in her conversation with Pyatt, is likely to become the center of attention in the coming weeks. The words will certainly create an atmosphere of distrust from the EU. Moreover, her suggestion that Klitschko should not go into the government of Ukraine is likely to create distrust on part of Klitschko.

During the Barack Obama administration, Nuland served as special envoy for Conventional Armed Forces in Europe before assuming the position of State Department spokesperson in summer 2011. In May  2013 she was nominated to serve as Assistant Secretary of State for European and Eurasian Affairs and sworn in to fill that role in September 2013.

US warns of explosives in toothpaste tubes ahead of Sochi Games