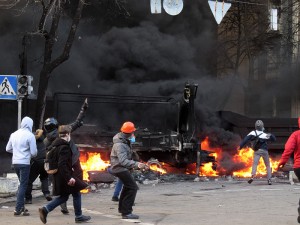 After a peace deal was signed on Friday following talks between Ukrainian President Viktor Yanukovych and his pro-European opponents, President Yanukovich left Kiev for Kharkiv, where he was interviewed by Russian television. In his insecure speech, Yanukovich addressed the people, stating that he was still the president and was not going anywhere.

Yanukovich defiantly claimed that he was a legitimately elected head of state and was chosen by the people to lead Ukraine. Despite the claims, Yanukovich is claimed to have attempted an escape to Russia. Media reports from within Ukraine state that he was trying to leave the country for Russia but was stopped at Kharkiv customs and is now hiding somewhere in the city.

As the security forces left the capital along with the Commander-in-Chief, the protesters took control of the city. Many entered Yanukovich’s palace and private zoo in the outskirts.

If Yanukovich is forced to stay in the country, he will most likely be subject to public trial for his role in the deaths of 83 people, most being civilian.

Under the deal signed with government and mediated by foreign ministers of Germany, Poland and France, constitutional changes will be made by the government reducing president’s power over the political process, and national unity government will be formed within ten days. Early presidential elections will also be held this year, most likely in December 2014. The constitution of the country was also quickly reverted to its 2004 version which gives more power to the parliament.

Yanukovich who conceded in the deadly standoff with the people, is already seen as a “former president”. The end of ordeal is considered a major victory of the united West against Russia’s imperial ambitions to reestablish its Soviet-type control over former republics of USSR.

It is unclear at this point how the situation will evolve around the large Russian minority of Ukraine mostly residing in the country’s east. The former prime minister Yulia Timoshenko who spent some time in the Ukrainian jail as a political prisoner was also released shortly before Yanukovich left Kiev.

Once out of jail, she appeared before the crowds and asked them to stand fast and remain in the Maidan until all issues are resolved. She also stated that this was not the victory of politicians and diplomats, but was the victory of the Ukrainian people.

Vladimir Lukin, Russia’s envoy for the talks was sent to Kiev by President Vladimir Putin Thursday night. He stated that “there was no clarity about the parties to the talks and who will be responsible for which things.”

Today, the parliament of Ukraine voted in favor of formally removing the President Yanukovich from power. The legislators also voted to sack Interior Minister Vitaly Zakharchenko who is blamed for this week’s bloodshed.