While celebrations on the 144th Anniversary of Mariscal Francisco Solano Lopez, Paraguay’s national hero, were taking place throughout Paraguay, Sandra McLeod de Zacarías, Mayor of the City of the East (Ciudad Del Este), announced in a press conference her plans to indulge herself by investing more than 570 thousand US dollars (or 2.6 millons of guaranies, Paraguay’s Local Currency), only in 2014, to hire public relations firms, TV Channels, National Newspapers and Radio Stations which will provide publicity to her administration and improve Mayor McLeod’s image at the helm of the Eastern Municipality.

The first agreement on this initiative was signed in January 9, by Carlos Dario Bordon Bottino with the amount of over 420 thousand US Dollars and Sandra McLeod de Zacarías (ANR) as the city’s mayor, who was elected immediately after her husband’s completion of mayoral period in office.

The Public Relations shopping spree in the largest city of Paraguay does not end here. The municipality has allocated another 130 thousand dollars to pay for the broadcasting of ordinances, resolutions, space in the national radio stations and broadcasting of accomplishments and inauguration of public works that are executed by Mayor McLeod. In fact, McLeod’s administration has proved to be very weak towards investment in public works, infrastructure, public schools remodeling and the war against poverty. Approximately 20 thousand US Dollars are back up funds that will be used for public relations in support of the incumbent mayor who aspires to run again in Paraguay’s local elections scheduled for 2015.

According to Diario Vanguardia, City of the East (Ciudad del Este) “continues to struggle with poverty and segregation, there is a complete negligence on the part of the local government in relation to providing food and improve the state of nutrition in more than 148 public schools, where only 4 schools are provided with milk and food supplies for kids and students. Unwillingness to build newer public schools, lack of public works, and poor infrastructure continue to be a major challenge for the city’s inhabitants.” 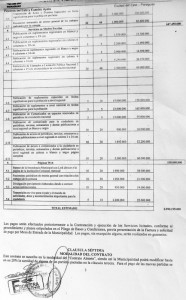 In a conversation with Foreign Policy News, Peter Tase, who has visited multiple times Ciudad del Este and constantly writes on Paraguay, states: “Instead of having such a large amount of money being spent to hire public relations firms, which only promote the leadership of Mayor McLeod, her administration and the city hall should have simply awarded 112 scholarships of five thousand US Dollars to each talented student who has no financial resources to attend the National University of the East located nearby the same town. This would have been the best way possible to advertise and promote her work in public service.”

In a city where over half of its population is living below the level poverty, it makes no sense of its elected officials to invest hundreds of thousands of dollars to broadcast their ‘daily accomplishments’, between “Frontera Producciones” owned The mission and public service of this local government, municipality, is seen and perceived by everyone, therefore there is no need for its citizens to watch on TV and listen on the radio a daily briefing on the roads that are being paved or schools that are being built. These projects, if implemented in the right way, are accessible and affect positively every citizen. Indeed, the City of the East is in desperate need for a new generation to take into control the helm of public offices, preserve transparency with the public, improve the state economy in the most dynamic region of Paraguay and promote education-friendly policies which guarantee the future for the youngest generations of this city in the Eastern borders of Paraguay.

In 2013, Paraguay had en economic growth of 13 percent, generated by a fruitful harvesting season of export commodities like organic sugar, soybeans, sesame seed, corn and manioc starch, however this economic miracle in the heart of south America exists only small pockets of society, in Asunción and Ciudad del Este. Additionally many luxurious hotels will open their doors later this year in Asuncion and Department of Guaira.

Unfortunately, according to the Paraguayan Central Bank, more than 30 percent of the population lives in poverty, and the nation continues to be one of the most unequal places in the Hemisphere. According to Andrew Nickson an expert in Paraguay’s anti-poverty efforts: “Nearly all of the growth is driven by highly mechanized agriculture, which generates few jobs for the population. With a government that finances itself largely through value-added taxes and taxes on imports, you have a situation rather like a low-income African country.”

According to the United Nations, Asuncion has not been successful towards reducing poverty over the last decade, it continues to be on the bottom of the list of countries tackling poverty in the region. Perhaps, better auditing practices to expenditures of public money as well as strict rules on taxation would help in leading Paraguay to the right path of poverty reduction. The City of the East is not en exception, tax collection practices and reduction of corruption and contraband would help this town succeed tremendously in the war against poverty.

According to Diario Vanguardia over “120 thousand US Dollars (G. 518 millons) will be spent for broadcasting of pres releases in the radio stations as well as 56 thousand US Dollars (G. 264 millones) Will be paid to Local TV Channels to broadcast every day the ‘successes and achievements’ of Mayor Sandra McLeod de Zacarias”. For Esteban Wiens, a possible mayoral candidate for the City Hall of Ciudad del Este, “this amount of money being spent in Public Relations is totally unnecessary, while taking into account the high level of poverty that is succumbing this town. There are many immediate needs that require funding from the Municipality instead of using public money to promote such a weak leadership of Mayor McLeod.”

How should the United States respond to the Ukrainian situation?

US and Germany discuss options for Ukraine resolution