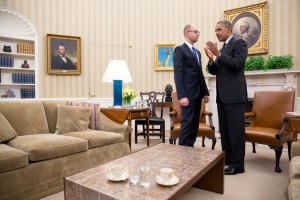 The Prime Minister of Ukraine Arseniy Yatseniuk is on an official visit in the United States. Having received a warm welcome from the U.S. administration, Yatseniuk received a diplomatic backing in his country’s standoff with a powerful neighbor Russia which seeks to dismantle Ukraine’s borders and split the country into pieces.

Speaking at the UN, the Prime Minister urged the UN to act to help Ukraine restore its territorial integrity. He sought an opportunity to bring the Russian side to the negotiations table to resolve the ongoing crisis. As he spoke to the UN, new clashes occurred in Donetsk, a city in eastern Ukraine, where a big Russian minority has a say. The pro-Kiev demonstrators peacefully protested against Russia’s invasion of Crimea when the pro-Russian groups attacked them turning the protest into a violent clash. As a result, one pro-Kiev protester was killed on the spot.

Yatseniuk urged the Russian leadership to withdraw from the internationally recognized region of Ukraine, Crimea and restore diplomatic ties. In response to the Prime Minister’s speech, the Russian ambassador to UN, Vitaly Churkin – who a few days ago waved a piece of paper with the signature of former President Yanukovych to the face of the fellow ambassadors at the UN Security Council which allegedly requested Russia to invade Ukraine – replied to Yatseniuk saying that Russia “did not want war” but Moscow had every right to invade Crimea, for the reasons of its own.

The Crimea crisis emerged once the Moscow-approved President Viktor Yanukovych was ousted by the Ukrainian parliament as the popular movement denouncing policies of Yanukovych, specifically diverting Ukraine from its path to integration in Europe and instead returning under the Russian tutelage.  Russian politicians and commentators parroted President Putin stating that the new government in power are terrorists who used violence to seize the power.

Now, the next milestone of the crisis is set to this Sunday, March 16 when the Russian-occupied and Putin-secured Crimea will be voting for its secession from Ukraine. The ethnic Ukrainians and minority Crimean Tatars are boycotting the referendum and in fact, the Crimean Tatar leader Mustafa Jemilev has publicly called for NATO to intervene militarily as NATO did with Kosovo.

Secretary John Kerry reiterated the position of the U.S. government that the escalating the situation by Russia with holding the referendum will yield costly consequences for Russia. Although the direct military standoff with Russia is ruled out, many other options, including military consulting and financial measures against Russia are still on the table. The United States already dispatched more than a dozen F-16s to Poland and Lithuania as a show of force in response to Russian army’s drills on the border with Ukraine and deployment of nearly 80 thousand troops along the perimeter of the Russo-Ukrainian border.

The Prime Minister Yatseniuk, in turn, had warned that the aggression against Ukraine will produce unfavorable results on the bigger scale, as this will justify any country’s ambitions to possess nuclear weapons. He was certainly referring to the Budapest Pact under which Ukraine agreed with Russia and the West to give up all of its nuclear arsenal after the collapse of Soviet Union by dispatching them to Russia’s destruction facilities. In return, Ukraine was guaranteed by the signatories its sovereignty and inviolability of state borders. Russia is in this pact’s violation.

It is unlikely that Vladimir Putin will pull his forces back, especially when the Prime Minister Yatseniuk openly declared today that Ukraine will sign the Association Agreement with EU this month, remaining committed to its integration with Europe. What’s more, Ukrainian parliament voted to call for voluntary mobilization. Since the Ukrainian army is 8 times smaller than the Russian one, Ukraine has a deficit of men capable of holding arms. The voluntary force, which is already called a ‘national guard’ will ascertain that mobilized volunteers are trained and are able to fight, but at the same time won’t have to get the entire length of draft that one regularly would serve in the Ukrainian army.

The referendum clock ticks. The West and Russia are on the brink of renewed Cold War. This Sunday will show the determination level of both sides.