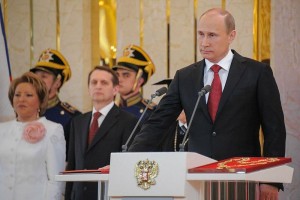 History can be interpreted in a different ways. Depending on the perspective, different sides can use their arguments for justification of numerous actions, and sometimes, it is very hard to establish the “truth” which is recognized by every party. However, it doesn’t mean that any nation can simply lie, substitute the notions, deny well-known facts, and if all of that doesn’t work try to switch the world’s attention on some farfetched threats. Finally, a nation cannot justify its own unlawful behavior by pointing on some other state’s actions.

Survival for a totalitarian regime requires an external enemy to unite people and turn their attention away from “uncomfortable” issues such as terrible living condition and total corruption. According to the Kremlin, the West and NATO are bitter enemies of Russia. Of course, no evidence is provided for such an allegation; however, it doesn’t stop Moscow to use them as red flags, constantly making those guilty in every situation.

The Kremlin is trying to antagonize people against each other using Cold War rhetoric by persuading them on the existence of some imaginary threats coming from West, NATO, Ukraine, etc. It is the only way to distract Russian people from their poor living conditions, corruption at all levels, and coming  economic crisis .

Russia invaded Ukraine and annexed a part of its territory. However, such actions are illegal and without any justification the Kremlin is now deflecting away from its aggression. It now says that military intervention is going on all around the world, headed by the US and guided by the rule of the gun. Even if there is such a case, does it give Russia any right to infringe Ukrainian sovereignty?

The Kremlin is still in the Cold War era and continually indoctrinates Russians to divide the world into the evil West and peaceful Russia. This is consistently evidenced by Putin in his justifications for the Kremlin’s aggression by pointing out the West.

Immoral abuse of the memory of millions

The population of Ukraine in 1940 was 41.7 million of people and in January 1945 it became 27.4 million (14.3 million less). According to the officially recognized version in Russia (by Krivosheyev), USSR lost 26.6 million of people as a result of World War II. While the exact number is not definitive, it is true that no other nation lost so many people as Ukraine did. However, the Kremlin propaganda does its job and we can see statements about 20 million World War II graves of Russians. Furthermore, Putin has made statements that without Ukraine Russia would still have won WWII. That is what immoral abuse of the memories of millions looks like!

Recall an infamous statement by Putin when he said that the collapse of the Soviet Union is the biggest geopolitical catastrophe of the 20th century. It reflects what he thinks of the world and how he sees it. Putin did not mention horrible events of WWI and WWII, no word was said about Holocaust, with more than 6 million of murders, he didn’t mention genocide organized by communists in Ukraine which took more than 10 million lives or other repressions done in the USSR or wherever else in the world. A new Soviet Union is the Kremlin’s goal, although the methods used for its creation are the same – based on force and deception (Putin’s Fiction: 10 False Claims About Ukraine ).

Before blaming Hillary Clinton of her comparison of Putin and Hitler one should analyze their actions. Currently, Clinton is correct – the invasion of Crimea is an effort by Putin to rewrite the boundaries of post-World War II Europe.  Hitler went unpunished for his violation of the Treaty of Versailles which led to World War II. Now, we are observing that Putin went unpunished after invading Georgia and is now annexing a region of Ukraine, all the while spewing cynical statements such as: “We always respected territorial integrity of Ukraine, unlike others, who split Ukraine. They’re to blame for divisions”.

A couple weeks ago, Putin stated that Crimea would not be annexed, yet recently he has already signed its annexation.  He also said in recent days ago that “we do not want a partition of Ukraine, we do not need this,” but after Transdniestria, Abkhazia, and Crimea it would be too naïve to think that this time they will follow their statement.

There are arguments that Russia is a wrong country to be labelled as Nazi. Perhaps it is true. Nazis didn’t attack and kill those who they called allies and brothers as Russia did. However, too many things look so similar…

The whole world is against current Kremlin’s actions. It is not about West vs. Russia, as they try to indoctrinate from Moscow. The Kremlin’s propaganda twists the facts and substitutes in an alternate reality. Russia is being compared to the Nazis because it uses exactly the same methods and rhetoric they did. It has nothing to do with Russian culture or people, and surely no one is trying to deface memories of the victims of WWII. Russia is being labeled Nazi because of the Kremlin’s attitude and policy towards other nations. It is unfortunate for Russians to live under such government, which manipulates them for its own benefits and uses them as human shield in order to stay in power.

Instead of working up people’s anger and indoctrinating them on the right to resolve as a response to the world’s condemnation of its aggression, Moscow should simply follow the law. Of course, it is unpleasant to hear when the whole world is labeling you Nazi but probably it’s a time to figure out why they are doing so? Nevertheless, the Kremlin has already made a ploy for justification its current and potential future violence and it’s going to get this plan implemented.

U.S. Ambassador to the United Nations Samantha Power said, “a thief can steal property, but that does not confer the right of ownership on the thief”. I hope that international community finally will start acting in order to not allow the Kremlin to implement its sinister goal.

The ongoing dilemma faced by many in the West is to either abandon Ukraine or punish Russia, when in fact this is not the decision at hand. The right question to ask is whether to stop Russia now or wait until it becomes stronger and takes more lives?

Oleksandr Iakymenko is an Edmund S Muskie Fellow at Western Illinois University and the International Secretary of the Ukrainian National Youth Organisation “Young Rukh”. He has worked as an expert at Kiev’s Institute of Political Education and the Ministry of Education and Science of Ukraine