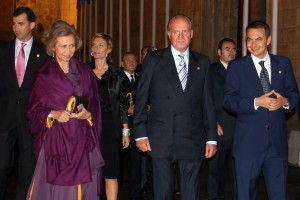 King Juan Carlos of Spain is said to be stepping down after a four-decade rule over the southwestern European country. The decision of the monarch was announced by the Prime Minister Mariano Rajoy.

Rajoy went on to say that this was the “best moment” for change. The Prime Minister stated that King Juan Carlos has been a constant advocate of the interests of Spain. The Spanish courts will be naming the current Prince of Asturias as the new King.

Juan Carlos, at 76 years of age, Juan Carlos is said to have had health problems for some time which is why his son was filling in to perform the official functions of the leader. The King had been named as the next head of state by the Spanish dictator Francisco Franco back in 1969. He was crowned on November 22, 1975 after a few days of Franco’s death.

He is known to have democratized Spain after dismantling Franco’s fascist regime after his death. Democratic reforms eventually led to the 1978 Spanish Constitution in a nation-wide referendum which established a constitutional monarchy.

Apart from health problems, the royal family was hit by a number of noisy scandals in the last few years. Princess Cristina and her husband Inaki Urdangarin have been under investigation by the law enforcement for corruption allegations.

The abdication of King Juan Carlos comes a few months before Spain will be going through its hardest times. The region of Catalonia is going to hold a referendum for secession from Spain this November. Madrid has already voiced its stance on the issue and named the referendum unconstitutional.