On June 17, the Honorable Chamber of the Senate, in the Congress of Paraguay, elected Senator Blas Llano by a simple majority, as the new leader of the Senate who will exercise his constitutional duties from July 1st 2014 until June 30th 2015.  In his first statement as the president-elect of National Congress, Senator Llano (from the Authentic Radical Liberal Party – PLRA, the second largest party in Paraguay) stated: “last year the PLRA signed the ‘Agreement for Paraguay’ and the main goal of this initiative was to improve and strengthen the national image of Paraguay in the World, to increase the level of Foreign Direct Investments in Paraguay and improve the transparency of our government.  It is of vital importance that PLRA [as the largest opposition party] is in a leadership position in one of the most important branches of the Paraguayan Government.”  Sen. Blas Llano is expected to support a new set of laws that will improve the overall justice system, greater transparency measures to be applied to local government offices as well as make the Paraguayan local government leaders more accountable and responsible with the public money.  The newly elected leaders of the National Senate together with the executive government led by President Horacio Cartes are planning to improve transparency in the upcoming months and make public every pertinent information that deals with all of the major expenses that are incurred with tax payers’ money by the national government officials and local government leaders such as Mayor Sandra McLeod in Ciudad del Este and other major city leaders in Paraguay.

This is an historic day for the Paraguayan Democracy, for the second time in two years, the Colorado Party and the Authentic Radical Liberal Party have joined forces to elect the official candidate of PLRA as the President of National Senate in Asuncion.  In 25 years of Paraguayan Democracy the proactive joint efforts that are recently led by the Paraguayan President Horacio Manuel Cartes Jara  (of the Colorado Party- ANR) and congressional leaders of PLRA are the most important moments in Paraguay’s history and a great progress towards strengthening the democratic institutions, rule of law and the national economic policies in the country.  The election of Sen. Llano is an important moment for the nation’s political future and will guarantee Paraguay’s financial and economic stability.

The  ANR-PLRA joint actions highlight a new beginning in President Cartes’ aggressive agenda in favor of having an open government, transparency, increase the fight against corruption and as he always likes to stress in many occasions: “making public everything that is public“.

According to the Paraguayan weekly journal Primera Plana: “The candidacy of Sen. Blas Llano as the President-Elect of the National Senate was supported by President Horacio Cartes, as a result of encountering obstacles to find the appropriate candidate from the Colorado Party; Sen. Llano will lead the Senate for one year. Moreover, the agreement with the National Union of Ethical Citizens was instrumental for the election of Sen. Blas Llano.” 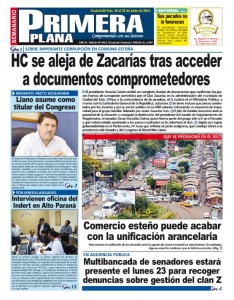 Juan Pio Balbuena, the editor in chief of Primera Plana adds further details on the election of the two Vice Presidents in Paraguay’s Senate: “the senators elected Senator Enrique Bacchetta (ANR) as the first Vice President who will replace Sen. Ramón Gómez Verlangieri (PLRA) and Senator Eduardo Petta (of the National Gathering Party – PEN) was elected and he will replace Sen. Víctor Bogado (ANR). Sen. Bacchetta won by a large margin of 28 votes in favor, 16 abstaining votes and one senator was absent. Sen. Petta was elected with 28 votes and had only 17 abstaining votes.”

The Paraguayan Senate is expected to implement an aggressive agenda in favor of transparency and the war against corruption, while ensuring that the General Auditors Office (Contraloria General de la Republica) will exercise its constitutional obligations and undertake lengthy investigations in the Municipality of the East in Ciudad del Este, Alto Parana.  The local citizens in Ciudad del Este expect that the National Anti-Corruption Secretariat under the leadership of Minister Abog. Maria Soledad Quiñonez Astigarraga (http://www.senac.gov.py/) will also intervene in the Municipality of Ciudad del Este in order to meticulously investigate every wrong doing and shed further light on the alleged corruption scandals of Mayor Sandra McLeod and her husband, a couple that has reigned the local government of Ciudad del Este for over 14 years, a city that is considered to be the largest logistical hub in the nation and the commercial capital of Paraguay.  Minister Maria Soledad Quiñonez has been a staunch supporter and has led many positive efforts in the war against corruption, impunity and is a long time advocate of having a more transparent government.

Dr. Quiñonez and her team at the National Anti-Corruption Secretariat, monitor and coordinate the implementation of the Paraguayan government’s policy towards preserving transparency and anti-corruption practices in every public office, government institution and local government entity; it promotes strategies to prevent and identify corruption scandals led by elected officials as well as report these cases to the attention of appropriate law enforcement authorities.

Over the last 14 years, the international image of Ciudad del Este, and Department of Alto Parana, has been completely deteriorated and ruined due to the high level of impunity, lack of transparency, corruption cases and decade’s long traffic of influence and abuse with public funds when Javier Zacarias Irun was the Mayor of Ciudad del Este and now his wife – Mayor Sandra McLeod elected for two terms in office – unfortunately is following his model of leadership and the exact path of footprints. This is why it is very difficult to hold major international conferences and forums in Ciudad del Este, that is due to the negative reputation that the City has aquired over the years and unfortunately the only person to blame is Javier Zacarias Irun and his wife, Mayor McLeod.  Javier Zacarias Irun has also a brother who is the current Governor of Alto Parana, as a result his family is very influential in such a wealthy region of Paraguay; they have genuinely become three oligarchs who run such an affluent region of Paraguay, as the rest of the population lingers from high levels of poverty, large numbers of malnourished kids, lack of education and precarious infrastructure of public schools.

In the recent elections for the leadership of Paraguayan Senate, Irun had a candidate who was running against Sen. Blas Llano, however his candidate lost by a large margin and at the same time the results of this election as well as Sen. Llano’s victory marks the end of the Zacarias Clan’s political future, and for the first time in Paraguay’s history the leaders of the two major political parties, including President Horacio Cartes, work hand in hand in order to improve transparency in the Paraguayan Government, significantly reduce poverty, increase economic growth and bring more accountability to the office of Mayor Sandra McLeod in Ciudad del Este.

Mayor McLeod has caused a great damage to the International Image of Ciudad del Este. The US Department of State recommends to its citizens to avoid travels in Ciudad del Este due to the high levels of crime, insecurity and safety in the city.  Such a bad reputation caused by the Zacarias Clan has negatively affected the economic growth of Ciudad del Este and Paraguay overall, because it makes it almost impossible to hold international business events and conferences in Paraguay’s largest commercial city, and US visitors including Peace Corps Volunteers in Paraguay, always avoid visiting Ciudad del Este.  With the newest alliance of PLRA and ANR, the people of Ciudad del Este hope that transparencly will prevail, corruption scandals will be public, traffic of influence will come to light and the Zacarias Irun clan is expected to go home and retire dishonorably from public service.

An overview of U.S.-Colombia bilateral relations