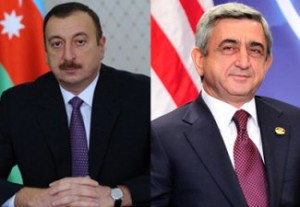 Russian President Vladimir Putin hosted Armenian and Azerbaijani heads of state on Sunday attempting to mediate between the warring nations after the ceasefire was broken on July 31. The intermittent fighting which is believed to be the bloodiest since 1994 has yet to stop.

In a televised trilateral meeting in the Russian resort city of Sochi, Putin called the sides to resume peace negotiations. Seemingly agitated, both Armenian and Azerbaijani presidents accused each other of wrongdoing. The Azerbaijani President Ilham Aliyev recognized the need for lasting peace but reminded that Armenian occupying forces remained in Nagorno Karabakh despite the four UN Security Council resolutions passed in 1993 (these resolutions call for an immediate and unconditional withdrawal of Armenian troops from the occupied territories of Azerbaijan.) The Armenian President Serzh Sargsyan responded in kind stating that it was the Armenian side which complied with these resolutions and bringing sides to ceasefire in 1994, while Azerbaijan has not complied.

Vladimir Putin concluded the short meeting noting that “the president of Azerbaijan has pointed out the need to solve the problem peacefully, and you [Armenian president] have said the same just now. This is really of the utmost importance, because there is no greater tragedy than the loss of lives.”

The meeting does not seem to have yielded any progress in the negotiations except for promises from sides to keep peace intact. Vladimir Putin who has angered the West with his support for Russian separatism in Ukraine and brought his country under a wave of economic sanctions, desperately needs an image of a peacemaker. Moreover, the Russian leader may be sending the West a stern message underlining the fact that Russia is not going to let Caucasus slip away that easy.

Azerbaijan is wary of Russia’s interests in the region and would not risk angering its northern neighbor with a direct war with Armenia. Armenia is Russia’s closest ally in the former Soviet Union. It hosts Russian troops and is a member to the Russian led Organization of Collective Security Treaty, which may act if Azerbaijan attacks Armenia. Azerbaijan, on its part, is not under military protection of an outside power and has built a strong army on its own. Its defense budget of more than $3 billion equals the entire state budget of Armenia.

Nagorno Karabakh is a part of Azerbaijan but it has been under the control of Armenian armed forces along with 7 other adjacent districts since 1994. Volatile peace is frequently broken and shootouts are common. Yet, the August upsurge of violence was believed to ignite a full fledged war between the two nations.

Russian humanitarian aid convoys thought to be a pretext to invasion