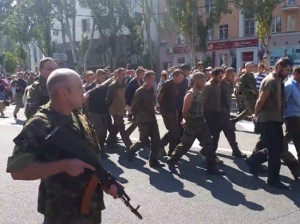 On Sunday as the country was celebrating 23 years of independence from the Soviet Union, the President of Ukraine Petro Poroshenko spoke before the Ukrainian people pledging to increase the spending on the Ukrainian armed forces to as much as $3 billion amid the war on the breakaway territories started by the newly elected head of state a few months ago.

Even with the Ukrainian government parading their military potential in Kyiv, the pro-Russian separatists in Ukraine had a public display of their own in the city of Donetsk, still held by the rebels.

The insurgents held a parade with a column of Ukrainian prisoners of war, being shouted and thrown things at. Dozens of Ukrainian prisoners dressed in ragged military and law enforcement uniforms, and civilian clothes were marched past angry crowds around Lenin Square. The separatists also displayed war-damaged Ukrainian military equipment including tanks and armored personnel carriers, which civilians used as a background for souvenir photographs.

The rhetoric in the separatists entities of Donetsk and Luhansk is that of the “struggle against fascism.” The Russian speaking population is told that the new government of Ukraine is highly nationalistic and is set to revive the “Benderovtsi” movement bitterly known by the Soviet army in the last days of WWII when Ukrainian nationalists from Western Ukrainian fought the Red Army in an effort to gain independence from an authoritarian state. They even reportedly went to an extent of collaborating with the Nazis to dislodge the Soviets from Ukraine when the opportunity was there.

These propaganda tactics are often used by the separatists in various states who fought secession wars. Bosnian and Croat Serb separatist authorities propagated secession stating that the Serbs would be under threat if Serbian-populated territories of Croatia and Bosnia remained within these sovereign states because Serbs would be killed by the Croatian neo-Ustase (Nazi-collaborating Croatians during WWII) and would fall to the vengeance of Bosnian Muslims who would allegedly establish an Islamic state and persecute non-Muslims; Armenians in Nagorno Karabakh province of Azerbaijan were frightened by nationalists with the memories of killings of hundreds of thousands of Armenians by the Ottoman Turks at the beginning of the 20th century, noting that Azeri Turks would do the same to them; Tamil people in Sri Lanka were told by the Tamil Tigers they would be eliminated as people by Theravada Buddhists who held the upper hand on the island.

The separatists in Ukraine continue their fight against the Ukrainian armed forces since April, when the provinces of Donetsk and Luhansk announced their split from Kyiv. According to the United Nations, close to 2,000 civilians were killed and more than 330,000 were expelled from their homes, so far.

Israel, Trump and the evangelical vote and the 2020 U.S elections 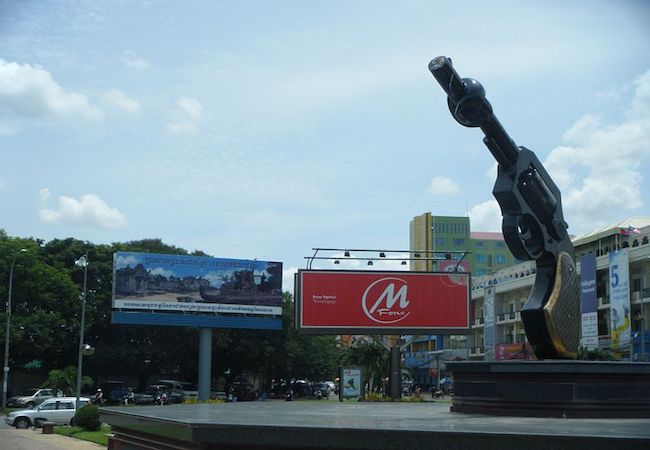