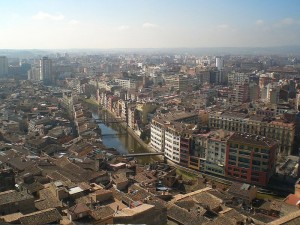 Catalans voted Sunday in a symbolic independence referendum which has no legal effect after the Spain’s constitutional court decided to suspend plans to hold a referendum on secession.

“We were able to use our votes despite the intimidation of the Spanish state and despite their big obstacles,” Artur Mas, the Catalan president, said.

Mas said he will send a letter to the prime minister, Mariano Rajoy, on Monday to ask the central government to “listen to the aspirations of Catalonian people.”

“Even they do not listen we will continue walking on this path.”

More than five million Catalans are eligible to vote Sunday elections in 1,317 centers hosting 6,695 polling stations from 9 am to 9 pm. The vote is being run by 40,930 volunteers.

Oriol Junqueras, the leader of the Republican Left of Catalonia said that the vote was “a feast of democracy.” “There is no need to ask the Spanish government for our independence,” he said.

The Spanish opposition Socialist Workers’ Party stands for a “federalist Catalonia,” whereas the Union, Progress and Democracy Party said that the Sunday’s vote is violating the constitution.

The former manager of Barcelona, and current manager of Bayern Munich in Germany, Josep Guardiola, also traveled Sunday from Bavaria to Catalonia to cast his vote.

“There are not just 4-5 people, but many with different views,” Guardiola said, adding that “the politicians must listen to the voice of the majority.”

Celebrating Allama Mohammad Iqbal - the Philosopher Poet of the East