The collapse of the American stock market can be linked to numerous reasons. The key questions are when will the collapse hit bottom and what will be the long-term consequences?

Despite the 1,000-point gain for the Dow Jones Industrial Average on December 26th, the New York Stock Exchange has been in freefall which is causing numerous investors a great deal of anxiety over their stock holdings. Just on December 24th, the Dow Jones Industrial Average fell 653 points, or 2.9%, on 3½ hours of trading since it closed at 1 PM due to the Christmas holiday. This set investors into a great deal of angst since the Dow had never seen a previous drop of more than 1% on Christmas Eve. But other indices also took a dive as the S&P 500 declined 2.7% and the NASDAQ went down 2.2%. Christmas became a welcomed relief for investors but there are key reasons why the markets are dropping overall.

Tariff effects: The Trump Administration has instituted major tariffs on Chinese goods coming into the United States such as televisions, washing machines, solar panels, electronics, and clothing. The Trump Administration instituted a 10% tariff on $200 billion worth of goods and the tariff will rise to 25% by January 1st, 2019. The Chinese government has retaliated by imposing tariffs on American goods such as farm products, cars, steel, and aluminum. While there is a brief period both countries have agreed upon before the tariffs go into effect, there is no assurance that permanent agreements will be made. American consumers will eventually see prices on retail goods increase and either begrudgingly pay more or stop spending altogether. Either way the stock market does not like the possibility that spending will decrease due to tariffs that are highly avoidable. The United States is a consumer-based economy and a reduction in spending will not only hurt American retail stores, but the stock markets will not like this bad news.

Interest rate hikes: The Federal Reserve Bank under Chairman Jerome Powell has raised short-term interest rates four times in 2018 and is expected to do it twice more in 2019. The Fed feels such rate hikes are necessary since the American economy is in a robust state with low unemployment and companies needing workers in order to meet customer demand. The problem is that the stock markets are worried that investor’s cash will be leaving equities in order to purchase higher yielding bonds and notes. The Fed is deeply concerned that inflation could start heading upward and causing consumers to either pay more for goods and services or cut back on spending. Either way this will have serious consequences for the American economy. President Trump has expressed his anger at The Fed’s actions and even threatened to fire Jerome Powell from his post as Fed chair. This only brings more uncertainty to economic and financial policy that the stock markets do not like. The financial markets want certainty, predictability, and stability, not an American president who threatens to interfere with the Fed’s independence in order for it to do its job. Higher interest rates should be expected since the American economy is doing well and many analysts feel that this is baked into the recent stock market decline.

Budget uncertainty: President Trump is dead set on building a wall between the United States and Mexico even if it means shutting down the federal government. Such an action is a sure sign of uncertainty and the financial markets do not like this move. The sad thing about the fight for funding the wall is that it is causing distress in the stock market and thereby affecting investor’s retirement planning, college savings accounts, and their overall net wealth. When investors see their statements in January 2019 showing how their stock portfolios performed for 2018, then there will probably be a huge cry to forego building the wall in order that the stock market will get back on track. If the current Republican-led House and Senate cannot get funding to build the wall, what chance does Trump have with a Democratic House to get money he desperately seeks?

Tax cuts not working: Donald Trump was able to get the tax cuts he sought in 2018, but it seems as if the beneficial effects were short-lived. The tax cuts saw more American companies bring home cash they kept overseas in their subsidiaries. However, the funds came back and went to shareholders in the form of cash dividends, stock buybacks, and special one-time extra dividend payments. The American economy has not really seen U.S.-based companies use the funds to increase spending for machinery, research and development, or expanding their operations. The tax cuts were expected to trickle down to workers in the form of pay increases or bonuses. But instead, companies such as General Motors and Harley-Davidson have announced that they will be laying off workers and shutting down manufacturing plants. The problem is further compounded when inflation is a distinct possibility as well as the imposition of tariffs thereby causing American workers to see their paychecks shrink despite the Trump tax cuts.

Trump White House chaos: The stock markets have not taken kindly to the chaotic situation in the Trump White House. The markets do not like disruption and the firing or exiting of key cabinet members only adds to the market’s anxiety. With the departure of Defense Secretary Jim Mattis, Chief of Staff John Kelly, and no real Attorney General, the chaos surrounding the Trump White House is causing the stock market unneeded anxiety. Matters will only worsen in 2019 as the House of Representatives will become controlled by Democrats and have all the committees and subcommittees look into the actions of the Trump White House with a very large magnifying glass. Especially disconcerting for the Trump Administration is the Democrats investigation into Russian interreference in the 2016 presidential elections. This will more than likely cause everyone, past and present, who worked in the Trump White House and presidential campaign to “lawyer-up” since they will face committee and subcommittee investigations.

Over-valued stock market: Financial analysts have long felt that the stock market is overvalued and that a correction was quite overdue. While investors have been riding high with great returns on their stock portfolios, the problem is that this was too good to be true. A correction was long overdue and that a downward movement on stock prices will be more severe than if it had occurred in 2017. Markets cannot always keep going up. History has shown that there have always been ups and downs. But the problem has been that this up has been protracted and now a downward slide in stock prices will mean financial pain, anxiety, and could possibly lead to a recession. Investors will slow down in their stock purchases and either become very liquid by purchasing money market instruments, or go into bonds of highly rated companies or Treasuries in order to sleep at night. It will also mean that investors will seek alternatives such as gold since it is something they can hold, feel, and touch when the stock market is moving downwards.

Tech stock tumble: Tech stocks have been the goose that kept laying the golden eggs. Whether it was Apple, Amazon, or Alphabet, they made investors rich and happy. Apple and Amazon were trillion-dollar companies in terms of market valuation, the first ever to have accomplished this feat. This meant that investors could buy tech stocks, not really know what they did, and still make high returns. This harkened back to the tech stock boom of the late 1990’s. But like the good old days of the last century, the tech stocks that were once the darlings of investors are hurting. For example, Apple is worth less than $725 billion, while Alphabet has lost approximately 25% of its value. While Amazon has seen a fairly good holiday shopping season, it is no longer a trillion-dollar company. Investors have pulled out of tech stocks, thereby causing the NASDAQ Composite Index to go from a peak of over 8,000 on August 29thto drop 21.9% as of Friday, December 21st. Such a prolonged high for tech was not sustainable, and a drop was not only inevitable but probably necessary. The problem now becomes when will the tech stocks hit bottom and how will the rest of the financial markets react. 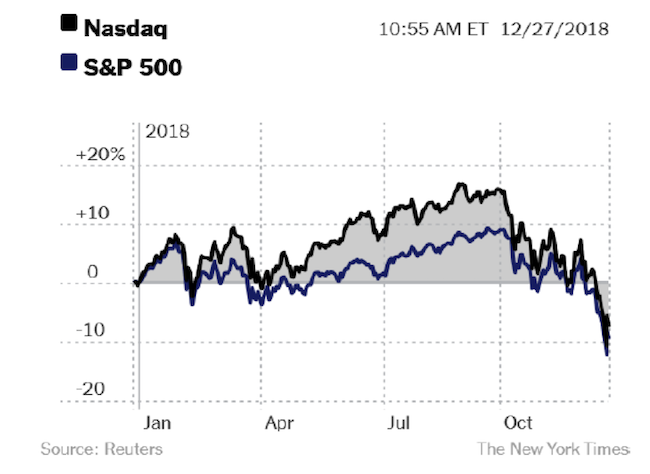 When will it end?

The financial markets are having a down time and many are worried that the repercussions could have serious effects on the American economy as well as for the rest of the world. Whether this downward slide will lead to another financial crisis resembling 2008-2009 is hard to tell. There could be a black swan lurking in the shadows that will cause the markets to really nosedive and make the current situation even worse. But until then, investors will need to make important decisions that could affect them financially, in the short-term and for the future.

No Climate Change without a generational interval

Who will be the leader of Turkey after Erdogan?