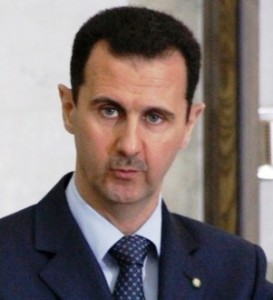 Unsurpising to anyone following the developments in the Middle East, Russia and China blocked a plan, proposed by Morocco and endorsed by the Arab League at the U.N. Security Council, which called for President Bashar Al-Assad to step down and hand over his duties to his deputy who, in turn, would call for general elections. According to the plan voted on January 31, Assad would have been given 15 days to comply and would then face “further measures” if he ignored the ultimatum.

Being one of permanent members of the UN Security Council, Russia had already vetoed a UN SC resolution last October condemning Syria’s use of force on civilians. While the West and its allies had been preparing foundation for Libya-like scenario to be implemented in Syria where the atrocities committed on civilians have already surpassed those done by Qaddafi, Russia has been nursing preparations of its own, which include not only defending Syria in the United Nations and any other international bodies, but also physical presence of Russian military on the shores of Syria. Shortly after voicing its support to Syrian regime in UN, Russia dispatched an aircraft -carrying missile cruiser, Admiral Kuznetsov and two escort ships on a two-month sail to the Syrian port of Tartus. Six hundred Russian technicians had already started working on the port infrastructure to prepare it for Russian ships. Almost simultaneously, Russia also sent the Russian Yakhont anti-ship cruise missiles to Syria.

Yakhont, also known as P-800 Oniks, is a sophisticated anti-ship missile systems which has a capacity to engage the enemy warships in the radius of 300 km. The United States and Israel expressed their discontent to arms supplies to Syria. According to Russian defense ministry, the modernization of Tartus base is intended for defense of Russian military establishment in the Middle East and is not intended for use against any country.

However, apart from defense of the Tartus base, Russia also has direct commercial and political interests in Syria. First of all, Russia is heavily invested into Syrian economy and defense industry. The investment in Syrian infrastructure, energy and tourism have totalled $19.4 billion in 2009. Russia’s Stroitransgaz and Tatneft are engaged in construction of gas pipeline, exploration and production of Syrian oil.  Obviously, Russia has been long displeased with the Western intervention in Libya and diplomatic pressure on Iran, where Russia also had and has economic interests. With Prime Minister Vladimir Putin returning to power, the attitude of Russian leadership will now become a lot bolder. Second incentive for standing strong behind Syria is its regime’s political weight. Syria is ruled by Alawis who are close to Shia branch of Islam although the county itself is predominantly Sunni. Hence, the years long close relationship of Syria’s leadership with Iran. Syria and Iran are likely to keep countering efforts of Sunni leaderships of Arab countries and individual contributors in Russia who fund Sunni separatist movements such as ones in Chechnya and Ingushetia. In a way, having control over Syria’s government would ensure Russia’s containing of potential hot spots on its own territory. In addition to having a satellite in the Middle East, Russia also hints on Russia’s re-emergence of global power. Support and supplying of Syria with weaponry is another way to show that Russia is no longer limited to conducting foreign policy only around its post-Soviet periphery but is capable to take counter measures in the Middle East and elsewhere to defend its national interests.

To sum up, Russia currently has hundreds of Russian civilian and government contractors, and military personnel on the ground in Syria and is likely to protect them if there is any offensive from outside. Let’s not forget that Russian military crossed Roki tunnel to invade Georgia’s breakaway region of South Ossetia and Georgia proper on August 8, 2008, claiming it was there to protect Russian citizens (many of South Oseetians had previously been awarded Russian citizenship). Five days later, Russian tanks rolled on as close as 15 km from the Georgian capital of Tbilisi. No Western power intervened, despite the diplomatic backing of the United States for many years. Although, Russians pulled back from surroundings of Tbilisi and Gori into unrecognized separatists regions of Abkhazia and South Ossetia, the end result was the de-facto occupation and recognition of these breakaway regions. So, the question is: if NATO decides to strike the Al-Assad regime, will it do so as per Libyan scenario, thus causing a possible military response from Russia, or will the West proceed with indirect support of the rebels, somewhat reminiscent of support given to the Afghani Mujahadeen during the Soviet occupation of Afghanistan in 1979-1989?

The reason Sudan will never rest