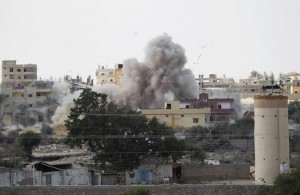 A strong explosion has hit a police headquarters in Egypt’s Nile Delta region, killing at least 14 people and injuring 100 others.

Officials say they suspect the blast early Tuesday in Mansour was caused by a car bomb.

The interim government blamed the attack on the Muslim Brotherhood, classifying the group of former president Mohamed Morsi as a terrorist organization. Prime Minister Hazem el-Beblawi vowed that those responsible “will not escape justice.”

The Brotherhood did not immediately comment on the allegation. The group has been the subject of a crackdown since Egypt’s military ousted Morsi in July.

Security forces have arrested much of the Brotherhood’s top leadership, including Morsi, and clashed with those demonstrating against the interim government. More than 1,000 people, mostly Islamists, have been killed in the fighting.

Islamist militants have been blamed for a number of attacks against Egyptian security forces in the past few months, particularly in the Sinai region, east of where Tuesday’s blast took place.