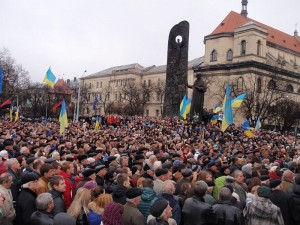 Today the Ukrainian government declared truce after the agreement was reached with the heads of three opposition groups in Kiev. The government apparently needs the time to think things through and to kill the momentum of the movement which has graduated into a fierce resistance and violent clashes between the protesters and the government security forces. The protesters, in turn, need the time to rest and allow the government to institute changes required by the opposition.

With the Western governments behind their backs, the opposition groups seem to be comfortable with the announced truce. Within the last two days, Kiev has turned into a combat zone with the downtown set on fire. The situation may not have seemed so dire, even with the reported casualties, if not for the visual images of this European capital being set ablaze.

Shortly before the truce, the government security forces officials announced that the protesters had taken the fight to another level by attacking the government offices and looting 1,500 weapons and 100,000 rounds of ammunition, which pushes the conflict into wider dimension.

The head of the security forces Oleksander Yakimenko called the protesters “terrorists”. The mere fact that the protesters obtained weapons – if that is true at all – is a testament to deteriorating situation which may lead Ukraine into a civil war. Considering the ethnic sensitivities, the country may be split into two camps – Ukrainian speaking in the West and Russian speaking on the East.

One of opposition leaders, Klitchko who is in charge of the Ukrainian Democratic Alliance for Reform party stated that the next round of talks will be held this Thursday. Until then the government of President Yanukovitch will allegedly stop attempts to disperse the protesters from the Maidan.

Earlier in the day, as per the DOS press release, Vice President Biden called Ukrainian President Viktor Yanukovych to express grave concern regarding the crisis on the streets of Kyiv.  He called on President Yanukovych to pull back government forces and to exercise maximum restraint. The Vice President made clear that the United States condemns violence by any side, but that the government bears special responsibility to de-escalate the situation. The Vice President further underscored the urgency of immediate dialogue with opposition leaders to address protesters’ legitimate grievances and to put forward serious proposals for political reform.  The United States is committed to supporting efforts to promote a peaceful resolution to the crisis that reflects the will and aspirations of the Ukrainian people.

Paraguay to break another record in soybean production

Street fights in Kiev results in dozens of deaths