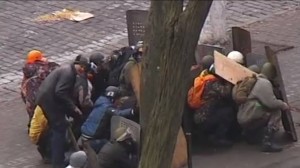 The renewed violence on Thursday morning led to deaths of dozens of people in the streets of Kiev as the protesters battled their way through against the ever aggressive government security forces. The truce announced yesterday was never meant to be.

The government forces were given permission to use deadly force to stop the opposition protesters. Protesters who are claimed to have obtained nearly 1,500 weapons demonstrated fierce resistance. Video reports show that most of the protesters are advancing against the government security forces with trophy anti-riot shields and helmets. Many protesters were seen to be shot by snipers.

As the resistance against the government grows, pro-Russian forces start to utilize more leverage against Ukraine. Crimea, the southern region of Ukraine, where Russia has had a privilege of retaining its Black Sea navy, has come into the spotlight last night when mass media reported on its local parliament’s decision to secede from Ukraine in response to the Ukrainian protests. Seventy eight out of eighty one deputies of the parliament of Crimea voted in favor of breaking up from Ukraine. Two members of the parliament abstained while on voted against the motion. The blame for the planned secession was laid onto the opposition, specifically blaming its leaders Klitchko, Yutsenyuk and Tyagnibok.

Ashton told a press conference following the meeting that the violence in Ukraine should be ended immediately and any further escalation should be avoided, saying “those were responsible for human rights violations should be brought to justice.” The EU did not publish a blacklist, but Italian Foreign Minister Emma Bonino told media that all the restrictive measures will be imposed rapidly “in the next hours.”

The U.S. Department of State issued another statement today expressing an outrage over “the images of Ukrainian security forces firing automatic weapons on their own people.  We urge President Yanukovych to immediately withdraw his security forces from downtown Kyiv and to respect the right of peaceful protest, and we urge protesters to express themselves peacefully.  We urge the Ukrainian military not to get involved in a conflict that can and should be resolved by political means.   The use of force will not resolve the crisis — clear steps must be taken to stop the violence and initiate meaningful dialogue that reduces tension and addresses the grievances of the Ukrainian people.  The United States will work with our European allies to hold those responsible for violence accountable and to help the Ukrainian people get a unified and independent Ukraine back on the path to a better future.”

The country has turned into the biggest battleground between the West and Russia and on the brink of collapse. The main challenge runs along the ethnic lines with the Western Ukraine being overly nationalistic and committed to Ukraine’s path towards Europe while the Eastern Ukraine with a big Russian minority is opting for closer ties with Russia. Besides the Russian minority utilized as a leverage over Ukrainian politics, Moscow also uses status of Crimea as another tool of pressure on Kiev. The peninsula was transferred to Ukrainian SSR under the leadership of Nikita Khrushchev; Russian view it as a slap in the face.

In the meantime, calls for help and outcries to the international community from within Ukraine continue: