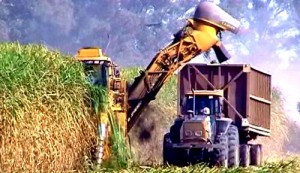 Nicaragua is the second largest exporter of sugar in Central America and is the country making the most use of sugarcane bagasse to generate clean energy.

Nicaragua is increasing biomass energy generation. According to ENERGIA LIMPIA XXI publication, during the first 3 months of this year biomass energy accounted for 10% of the national energy matrix.

Mario Amador, General Manager of the National Committee of Sugar Producers (CNPA) and Chairman of the Central American Sugar Association (AICA), said that in the last 20 years the return level in sugar production and the generation of biomass have doubled, from 35 to 78 tons per hectares. Regarding renewable energy, the sugar sector is contributing with 64 MW to the national electrical grid.

Nicaragua is the second largest exporter of sugar in Central America and is the country making the most use of sugarcane bagasse to generate electricity.The 2013-2014 sugar harvest reached more than 1.6 billion kilos, over one million bags compared to the previous cycle. During the 2012-2016 period, sugar producers have projected about $ 400 million dollars in investments to increase sugar production and power generation.
Green Power

The Nicaragua Ministry of Energy and Mines (MEM) recently granted a 30 year license to Green Power company for the establishment of a 38 MW “COGENERACION” plant located at“Ingenio Montelimar” in Managua department. The plant will generate energy using biomass from sugarcane waste.

The power generated will be used to cover the needs of “Ingenio Montelimar” and the surplus will be sold to the National Interconnected System (SIN). The MEM reiterated that the promotion of investments in renewable sources to generate electricity is Nicaragua state policy.

Advantages of biomass, according to CONSERVE ENERGY FUTURE publication.

2. Clean Energy : Because of its relatively clean use, biomass energy, when used in commercial businesses such as airlines, receives tax credit from the US government. This is good for the environment and good for business. It does release carbon dioxide but captures carbon dioxide for its own growth. Carbon dioxide released by fossil fuel are released into the atmosphere and are harmful to the environment.

3. Abundant and Renewable : Biomass products are abundant and renewable. Since they come from living sources, and life is cyclical, these products potentially never run out, so long as there is something living on earth and there is someone there to turn that living things components and waste products into energy. In the United Kingdom, biomass fuels are made from recycled chicken droppings. In the United States and Russia, there are plentiful forests for lumber to be used in the production of biomass energy.

4. Reduce Dependency on Fossil Fuels : It has developed as an alternate source of fuel for many homeowners and have helped them to reduce their dependency on fossil fuels.

5. Reduce Landfills : Another benefit of this energy is that it can take waste that is harmful to the environment and turn it into something useful. For instance, garbage as landfill can, at least partially, be burned to create useable biomass energy.

Rafael J. López is a journalist and co-director of ‘Energía Limpia para Todos’

Secretary Kerry made a statement on Iraq

U.S. conducts an airdrop over Iraq as airstrikes stop the ISIL advance