On September 16th, 2014, Javier Zacarías Irún, an unemployed politician, the former mayor of the City of the East – Paraguay and the self-claimed leader of Z3 political group of Alto Parana, begun to trumpet in the social media his bogus-self-proclaimed official visit to Washington, D.C., while irresponsibly spending large sums of tax payers’ money that is collected by his wife who happened to be the Mayor of Ciudad del Este.  For those of us who are far away from Paraguay, Ciudad del Este is perhaps the wealthiest city in South America, only last year it managed to collect through taxes, more than US$60 million, meanwhile Mayor McLeod and her ‘subordinates’ members of the city council refuse to embrace transparency and show to the public all the expenses incurred by the city hall, as well as repeatedly have ignored and discredited the public statement issued by President Horacio Cartes who has reiterated multiple times that “what is public must be revealed in public”.  In this case, Javier Zacarías Irún has committed another fraudulent act, by visiting one of the most expensive capital cities in the world with the public money, an act that even his presumed hosts would abhor.  In his announcement the leader of Z3 Group states that he was invited to give a lecture by the George Washington University and the National Democratic Institute (NDI), after making multiple phone calls to both of these institutions, it was evident that the conference proclaimed by Mr. Zacarías Irún, on the social media, turned out to have inexistent media coverage and was not confirmed by the representatives of both institutions. At the same time looking at the George Washington University Calendar of events (in this website http://browse.calendar.gwu.edu/EventList.aspx?fromdate=9/15/2014&todate=9/15/2014&view=DateTime&display=Day&type=public ) it is crystal clear that Mr. Irun’s event is nowhere to be seen.

Mr. Irun is undertaking these expensive visits in the midst of protests and public unrest towards his corrupt family clan of politicians who are ill administering the public money and are using these public financial resources to take lavish vacation trips to the Caribbean (a month ago) and to the United States.   In his social media page, Mr. Zacarías Irún, states that he is participating in “an executive seminar at the George Washington University” and he fails to provide a website of the program where he is attending and spending public money in the least meaningful way possible.   Mr. Irun’s luxurious trips are taking place at a time when Ciudad del Este needs education infrastructure, paved roads, the implementation of Public Works and construction of public parks, improvement of the national image abroad, effective use of public money as well as publicizing the expenses of the Mayor’s and Governor’s offices.  The governor of Alto Parana is Justo Zacarías Irún, the brother of Javier Zacarías Irún and the mayor of the City hall of Ciudad del Este is Mr. Irun’s wife, Sandra McLeod.  Currently Mr. Justo Zacarías Irún, is spending his honey moon in Taiwan, while spending public money in hotels and resorts in the Asian island. He has been in Taipei for more than eight day now and has not shared his intercontinental trip with the leaders of the Executive Council of the Alto Parana Department.

Mr. Irun mentions in his statement that he was invited by the National Democratic Institute.  The truth is that the National Democratic Institute (NDI) “views the development of strong, democratic, public-sector institutions as a critical component of its mission. It is through improved governance that the benefits of democratic development most directly impact the lives of citizens.”  Therefore the mission and vision of NDI is in complete contrast with what Mr. Zacarías Irún has done in Ciudad del Este, during his more than a decade-long poor leadership as the mayor of Ciudad del Este.  It is extremely hard to believe that NDI would extend an invitation to one of the most corrupted politicians in the hemisphere. NDI seeks to promote effective public sector institutions, promotes transparency, representation, accountability and pluralism. Unfortunately, these afore mentioned values are not part of the political legacy, inherited by Mr. Zacarías Irún, during the whole time spent in public office.  Such announcements by this Paraguayan politician are a mere disinformation and unreliable.  According to many international observers, the administrations of Javier Zacarías Irún and his wife have proved to be very ineffective, corrupt, characterized by the Council on Hemispheric Affairs as a city with high levels of kleptocracy, nepotism and abuse of public money.

On September 11th, 2014, large crowds of people, who traveled from all over Alto Parana, marched in front of the Attorney General’s Office in Ciudad del Este to demand the prosecution and public impeachment of Mr. Javier Zacarías Irún, his wife Sandra McLeod, his brother as Governor of Alto Parana and other corrupted politicians in Ciudad del Este. The Citizens’ Front is becoming more popular than ever before, it is gaining even more traction as the local government elections’ date is approaching.  Its leaders have drafted a dozen of public demands and have spoken against Mr. Irun’s political clan and have revealed for the first time numerous expenditure violations and corruption cases in the City Hall, and the Governor’s office, related to losses of many millions of US dollars and characterized by a lack of spending accountability.  The Citizens’ Front is hoping to further raise the awareness in the Executive Government of Paraguay with hopes that the Mayor of Ciudad del Este will publicize all expenditures, make transparent all expenses that are incurred during the last decade when Mr. Zacarías Irún and his wife have ruled with an iron fist and bribery the commercial capital of Paraguay. 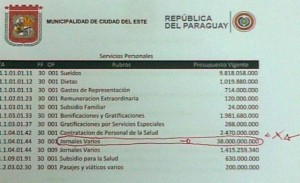 This mobilization begun on last Monday, September 15th, in the “Square of Peace” in Ciudad del Este, where more than 500 taxi drivers, workers, small vendors, hungry farmers and responsible citizens who aspire to embrace an open government that is responsible and willing to address the numerous challenges that Ciudad del Este is currently facing. These protests, led by the Federation of Taxi Drivers of Ciudad del Este, caused traffic difficulties in the main roads of the city and are expected to continue for weeks and weeks until the city hall sets free its leaders who are illegally arrested with the direct order of Mayor Sandra McLeod.  According to Mr. Darío Aguayo, the Secretary General of Citizens Front (Frente Ciudadano) the following five leaders of this Federation have been arrested: Valerio Martínez, Roberto Feltes, Derlis Gaona, Enrique Rolón and Herminio Corvalán.  Mr. Aguayo states that:  “Ciudad del Este is engulfed in a dictatorship. The five taxi drivers have been arrested because they were exercising one of their constitutional rights, peacefully demonstrating in front of the City Hall. This Demonstration is for those workers that have been persecuted, abused and have been harassed by the arrogant regime of Mayor Sandra McLeod and her husband. Our colleagues are arrested because they defended the rights and dignity of every taxi driver and working citizens of Ciudad del Este. The perpetual dictatorship is reigning in the City of the East. We must send into political retirement all members of the Z3 group.”

With his recent private (self-proclaimed by Mr. Irun as an ‘official visit’) trip to Washington, D.C. makes Mr. Javier Zacarías Irún eligible to receive a new alias and from now on he would be known – not only nationally but also internationally – as the Commander of thieves in the Z3 Group.  Previously he has been dubbed by US and Canadian Mass Media as the commander in chief of Z3 group and in other official reports has been portrayed as the tsar of the triple frontier.

Why Scotland’s divorce is legal, why Crimea’s wasn’t, and why Catalonia isn’t going anywhere