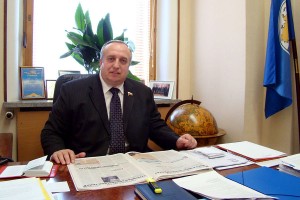 In his recent interview to the Russian newspaper Izvestiya, member of the Russian Duma Frantz Klintsevich stated that Moscow was ready to launch a counterattack against Ukrainian army if the well-being of Russian citizens and “our territories” were endangered.

The remark was in response to reports about Kyiv’s plans to boost its military potential in the wake of an ongoing conflict in Eastern Ukraine. The Ukrainian government was caught off guard at the beginning of 2014 when Russia unilaterally annexed Crimea, a part of sovereign Ukrainian territory claimed by Moscow after the dissolution of Soviet Union in December 1991. Crimea, occupied by Russian Empire in 1783, was transferred to Ukrainian Soviet Socialist Republic (USSR) by Nikita Khrushchev in 1954. By having Ukraine sign 1994 Budapest Pact, which stipulated surrendering Ukraine’s nuclear arsenal in exchange to recognition and safeguarding of its sovereign borders by several countries, including Russia, Moscow had relinquished its claims to the peninsula. That policy changed in February 2014 after previous pro-Russian President Yanukovich was ousted by Maidan movement at the beginning of the year.

Coupled with annexation of Crimea, Moscow moved on with its “Novorossiya” project, supporting separatist movements on the territory of Eastern Ukraine. Two puppet regimes of “Donetsk People’s Republic” and “Luhansk People’s Republic” were installed to oversee secession of vital Ukrainian provinces from Kyiv.

Although Ukraine is known as a major arms producer, its own armed forces were not ready for a war with heavily armed separatist groups, supported by Kremlin. The newly elected President of Ukraine Petro Poroshenko launched an anti-terrorist operation in Eastern Ukraine and although there was relative success in restoring sovereignty over several Ukrainian towns, the momentum was broken by counteroffensive of Russian forces. Ukraine and the West claims Russian military convoys had passed the Russia-Ukraine border at night to stop the Ukrainian army. The status quo is unchanged as of now, with pro-Russian separatists retaining control of Donbass.

Frantz Klintsevich, also claims that the Ukraine is planing to continue its military operation in Eastern Ukraine because the West will finance only military needs of Kyiv government and would not provide any means for economy, agriculture and social needs of the country. He noted that “Novorossiya” is needed for installation of precision-guided missile systems in close proximity of Russian territory, which represents an existential threat to Russian state. He went on to say that former Soviet airports in Poland and Baltic states are being reconstructed to host new NATO bases.

Klintsevich claims that the Ukrainian army has undertaken a task of ethnic cleansing of Russians from Eastern Ukraine, and resistance on part of the separatists in Ukraine is only natural and self-defense. According to him, there is a substantial amount of shale gas in Donbass and the West seeks to exploit these resources after Ukraine establishes a “buffer zone” with Russia. Despite the reports that there had been 3,463 people killed in the conflict so far, claims the member of Russian Duma, “there are more than 31 thousands dead.”

Putin promises not to create gas crisis in Europe

Ordubad: an ancient city in the heart of Eurasia