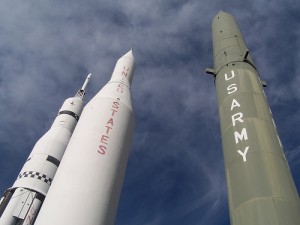 On May 23, Russian military test-fired a ballistic missile, in an effort to display a tougher response to NATO’s missile defense shield in Eastern Europe. Earlier this year, Russia addressed several issues deriving from its concerns over expansion of NATO too close to its borders. Months of negotiations to diffuse the rocky US-Russian relationship did not help.

Even the controversial statement of President Obama during the Seoul Nuclear Security Summit, where he whispered to his Russian counterpart Dmitry Medvedev that he would have “more flexibility” on the issue after the Presidential election of 2012 and which was interpreted as “capitulating to the Russians” in Jon Stewart’s “The Daily Show”, the things did not ease. Russian government thinks, the test-firing of the ballistic missile in Russia’s northwestern Arkhangelsk Oblast overlooking northern and central Europe was an adequate response to a recent NATO announcement that it deployed an “interim missile defense shield in Europe”. The missile was fired from the Plesetsk Cosmodrome and is considered a part of Russia’s Strategic Missile Forces.

Although the West has been trying to convince Washington that the defense shield systems are intended to protect the European nations from Iran, Russia is not buying it. As NATO proceeded with its plans for the shield, the Russian government became busy strengthening its own capabilities investing in military modernization of its strategic forces on its European boundaries.

NATO leadership stated it invited Russia to take part in the interim defense capabilities, but Russia became reluctant to join any efforts for defense, unless the West provided legal guarantees stipulating the shield would not be used against Russia’s own defense systems. The interim defense systems announced are the missile interceptors on an American ship in the Mediterranean, among the four intended for the system with a defense radar already operational in Turkey. The defense system is under NATO control in the U.S. base in Ramstein, Germany.

Russia has already threatened to leave the START treaty on nuclear weapons reductions altogether and respond with the deployment of ballistic missile systems in Kaliningrad district. As diplomatic tensions unravel, this might sooner or later just be the case.